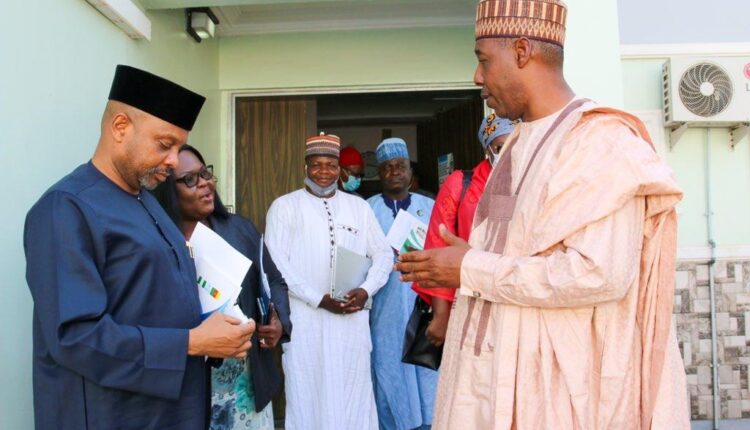 As part of efforts to ensure safe return and resettlement of Borno State Internally Displaced Persons (IDPs), the Federal Government the state’s Governor, Babagana Zulum, and the United Nations representatives have met to discuss modalities that would guaranteed smooth resettlement of the IDPs.

As gathered, the meeting had been convened to facilitate full restoration of civil authority and normalcy that would aid seamless resettlement of the IDPs and strengthen the peoples’ trust in both apex and state governments.

As stated, both apex government and the UN representatives restated commitment that the duo would be supporting ongoing efforts of the state government aimed at relocating and resettle the IDPs back to their ancestral homes across the state.

The meeting, it was learnt, which held in Abuja on Thursday, had in attendance the federal commissioner in charge of National Commission for Refugees, Migrants and Internally Displaced Persons, Senator Basheer Mohammed, the Country Representative of the United Nations High Commission for Refugees (UNHCR) Chansa Kapaya and governor Zulum.

Held behind closed door,the meeting was said to be sequel to discussions and collaborative efforts with government in Niger, Cameroon and Chad where Nigeria has refugees in line with international role of the UNHCR.

It would be recalled that Zulum, Basheer and officials of the Federal Ministry of Humanitarian Affairs, Disaster Management and Social Development were in the neighboring countries at different times to facilitate return of the refugees for resettlement in Borno. The governor also met with the Chadian ambassador to Nigeria over refugees from Borno state temporarily in parts of Chad.

Zulum’s administration has been engaged in ongoing construction of over 6,000 low-income houses in different parts of Borno for phase by phase resettlement of refugees and internally displaced persons as part of continued efforts to return Nigerians, mostly from Borno state who, in batches, fled to neighboring countries over attacks by Boko Haram.