JUST IN: Desmond Tutu made me contest 1999 election-… 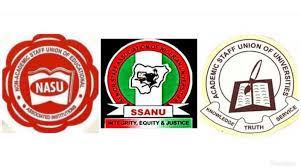 It said that ASUU deserved to receive large percentage of the funds since the union caters for lecturers especially professors, who should be paid higher wages considering their status in the academic environment.

The government, while intervening in the face-off between the unions yesterday, recommended that ASUU should take 75 percent of the funds while the non-teaching staff across the varsities should accept 25 percent.

The proposed N22.1bn allowance, it was learnt, would be released by the apex government to ASUU and was expected to disburse to other unions in the tertiary institutions.

As the unions await the funds, ASUU announced that it would take 75 percent of the total fund while others go away with the remaining 25 percent; a declaration that has attracted the anger of the other unions that rejected the sharing formula.

The Minister of State for Education, Chukwuemeka Nwajiuba, during an interview with pressmen, explained that the issue of percentage is not meant to be as difficult as it is handled by unions, it was impossible for the unions to share the allowance equally.

Nwajiuba stated that the allocation cannot be the same, adding that the issue of earned allowances is a matter of individuality and the unions have to be rated based on each category of worker.

“In the university system, we have professors and that is like one of the highest ranks, you have associate lecturers, you have readers. Now, ASUU has lots of professors and senior lecturers. The rates for these people are much higher.

“When you go to SSANU and NASU, you talk of the librarians, and the laboratory workers. They do not have professors in their unions. That is why it seems as if ASUU is getting a higher percentage. No one is side-lining SSANU and NASU.

“They are both important in the system but you can’t pay a union with a great number of higher ranks the same percentage with other unions. It is not possible and that is why we wanted to pay directly to individual accounts.” he added.

How Cameroonian terror group kill monarch, 10 others in Taraba