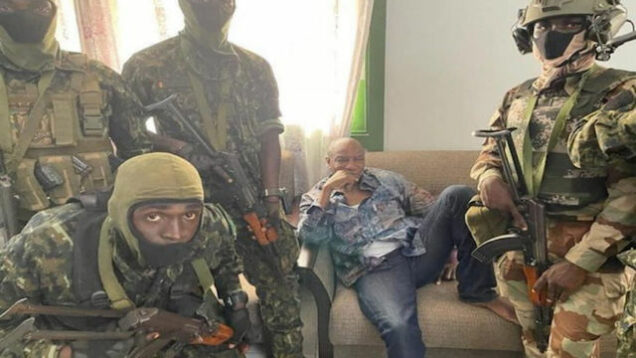 The Nigerian Government and United Nations (UN) have condemned the coup that ousted President Alpha Conde of Guinea, calling for the immediate and unconditional restoration of constitutional order in the country.

They described the military officers that claimed to have seized power as putschists and urged them to release the country’s detained president and restore the constitution of the country.

Through separate statements issued on Sunday hours after President Alpha Conde of Guinea was arrested and detained by the military officers that seized power in the West African nation.

The Federal Government, in its statement signed by the spokesperson for ministry of foreign affairs, Esther Sunsuwa, said the coup was a violation of the Economic Community Of West African States (ECOWAS) Protocol on Democracy and Good Governance.

“The Nigerian Government is saddened by the apparent coup d’état that has taken place in the Republic of Guinea today, in clear violation of the ECOWAS Protocol on Democracy and Good Governance.

“The Government of Nigeria strongly condemns and rejects any unconstitutional change of government and therefore calls on those behind this coup to restore constitutional order without delay and protect all lives and property.” the statement added.

Also, the UN Secretary-General, Antonio Guterres, said: “I am personally following the situation in Guinea very closely. I strongly condemn any takeover of the government by force of the gun and call for the immediate release of President Alpha Conde”.

Guinean special forces staged a coup on Sunday, arresting the president, in the latest political upheaval to roil the impoverished west African country.

“We have decided, after having taken the president, to dissolve the constitution,” said a uniformed officer flanked by soldiers toting assault rifles in a video sent to newsmen.

The officer, in the video released shortly after the takeover of power, said that Guinea’s land and air borders have been shut and the government has been dissolved.

Another video sent to newsmen by the putschists showed a rumpled-looking President Alpha Conde sitting on a sofa, surrounded by troops. He refused to answer a question from one soldier about whether he was being mistreated.

Guinea, one of the world’s poorest countries despite boasting significant mineral resources, has long been beset by political instability which was said to have resulted in the coup.

Earlier on Sunday, residents of the capital Conakry’s Kaloum district, the government quarter, reported hearing heavy gunfire, possibly between the government forces and the coup plotters.

A Western diplomat in Conakry who declined to be named suggested the unrest may have started after the dismissal of a senior commander in the special forces — provoking some of its highly trained members to rebel.