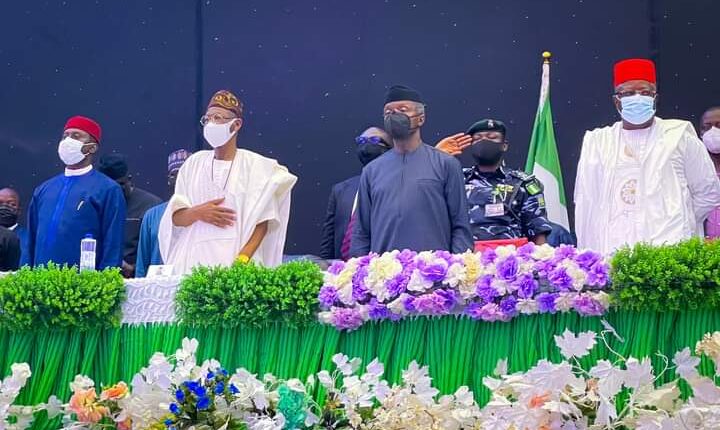 Nigeria’s Vice President, Prof. Yemi Osinbajo, has disclosed that the President Muhammadu Buhari-led administration would deploy special security team after killer herdsmen and other terrorists across the country.

He added that particularly, additional security formation would be deployed after attackers of Egedegede in Ishielu Local Government Area Ebonyi State.

While condemning the senseless killings by the attackers alleged to be herdsmen, Osinbajo assured that the Federal Government would stop at nothing in ensuring that the hoodlums were fished out and made to face the course of justice.

Speaking when he led a federal government delegation to condolence the government and people of Ebonyi on Sunday, Osinbajo said efforts would be intensified in bringing the perpetrators to justice.

“Those who have been mercilessly massacred are human beings like you and me who have hopes and aspirations but they are today dead because of the cowardly act of the herders who have lived with them for years, all of us condemn it and we say that this must not be allowed to happen again, let me assure you that we will seek justice on behalf of those who have been killed,” he said.

He assured that the Government would deploy more security personnel to the area to forestall the reoccurrence of such an attack.

Meanwhile, the Vice-President also visited the Effium Community ravaged by intra-communal crises between Effium and Ezza Effium clans. He called on the warring parties to sheath their sword to pave way for assistance from the government such that would aid needed development.

“Hundreds of people lost their lives, business and means of livelihood destroyed, Mr. President was particularly concerned about this, for the families of those who have lost their lives, you should please accept the condolences of the Federal Republic of Nigeria, I want to say first to the leadership that the responsibility of leadership is to ensure that the people we lead do not die needless deaths, we must do something about peace in our Communities”

On his part, the state’s governor, David Umahi, while reporting that the state government had made a concerted effort to nip the crisis in the burd warned political actors against making inflammatory utterances about the hostilities.

“We have done all that we could do to avert this crisis and sometimes, I even had to arrest all leaders from both sides and locked them up and for one week there were no crises but suddenly the war resumed, killing one-month-old babies, mothers, and so on and I have directed that anyone found with a gun should be demobilized. We have requested NEMA to immediately move to this place to provide food, clothing, and building materials. Let me publicly say that the politicians should stop making inflammatory statements about this crisis”

Furthermore, Umahi also announced the activation of local vigilantes to provide internal security in parts of the state, warning that his government may be unable to hold back the youth if suchlike killings by the herders reoccur.

He appealed to the federal government to make funds available for the resettlement of those whose households and means of livelihood were affected by the attack.

“Your Excellency, we are touched and we are encouraged by this visit, am told the murderers left a telephone which contains their contacts, their call logs, and pictures, Your Excellency, these things are enough to get these people apprehended, very shocking is that at the point of the attack, all the herdsmen living in Ishielu Local Government all deserted, this means that they were part of the attack on our people despite the Governors of the South East being called names because we are committed to giving them protection, it is very important we do anything possible to forestall further attacks not only in Ebonyi State but in the entire southeast”