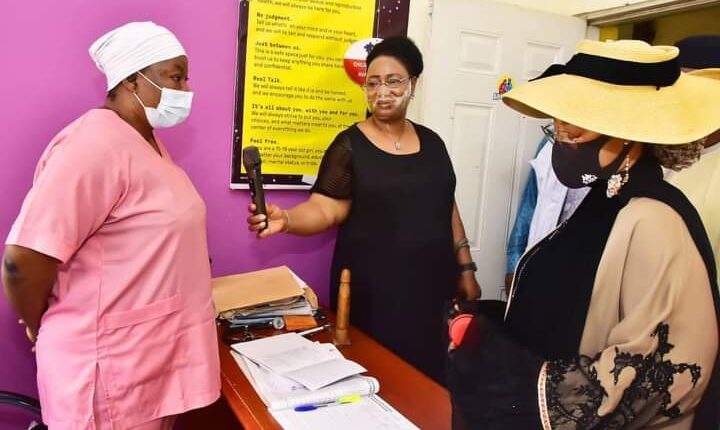 The Federal Government has ordered that the ongoing construction of lock-up shops at the Karu Primary Healthcare Centre should stop immediately over inability to ascertain the project viability.

It revealed that the Federal Capital Territory (FCT) Administration would set up a committee to ascertain the viability of the ongoing construction work to the primary healthcare centre.

The FCT Minister of State, Dr. Ramatu Aliyu, who gave the stop-work order during an inspection tour of facilities at the primary healthcare centre yesterday, hinted that the work was undertaken by the Abuja Municipal Area Council in partnership with a private developer.

Aliyu, who expressed strong reservations over the location of Karu primary healthcare centre, noted that the centre was not serene due to the proximity of the abattoir and other commercial activities around the healthcare facility.

She, however, affirmed that the construction of additional lock-up shops by the Abuja Municipal Area Council within the premises of the primary healthcare centre could compound the existing situation.

In her words: “It is pertinent to put a stop to this ongoing construction work. A ministerial committee will be set with effect from today for immediate action and the scope will be made known to you. Membership will include even the operators of the abattoir. Take a look at the abattoir, you cannot have a primary healthcare facility as strategic as the Karu primary healthcare is, and expose it to so many hazards.”

“Having the abattoir here alone is a hazard to the functions of the primary healthcare not to talk of a commercial place again. This is a very big project with so many shops around it will over-expose the facility. It could be acceptable to have the Sickle Cell Center or the AMAC health secretariat. We will look at this and other land functions that could be allocated, but certainly, it is unhealthy to have these shops here.”

“It is already bad enough to have the raw meat sellers within the vicinity and it will be worst to allow other commercial activities to go on here. If we must change the land use, we must engage the community effectively because you cannot have a hospital or healthcare centre where there are so many noisy activities”.

Earlier, the Director of Works, Abuja Municipal Area Council, Gaza Andrew, informed the minister that the initial project was the completion of the abandoned Sickle Cell Centre and AMAC Healthcare Centre, stressing that with the involvement of Development Control the council later added the design for corner shops. “Right here is an abandoned foundation of a sickle cell center, it was abandoned for over 10 years. The paramount ruler personally in 2020 wrote to us that due to the growing cases of sickle cell this project should be completed”, he affirmed.