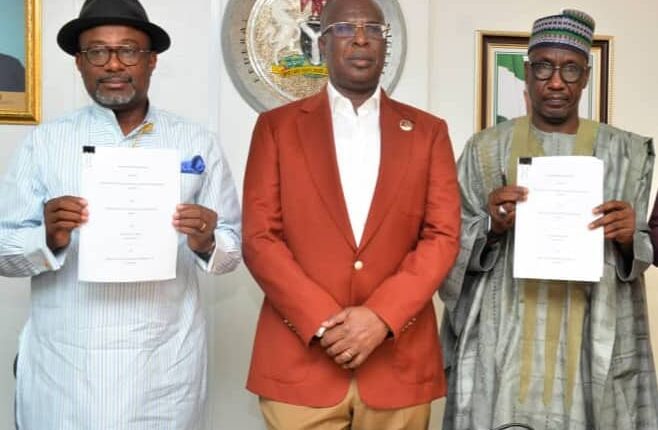 At least 5000 youths from Niger Delta should be expecting direct jobs from N10.5 billion petroleum terminal projects, which was signed between federal governments through the Nigerian National Petroleum Corporation (NNPC), the Nigerian Content Development & Monitoring Board (NCDMB), and a private oil firm, Zed Energy with the expectation to ruin 50 million litre petroleum production through the terminal on daily basis.

As gathered, the project, when completed, would operate an automated loading bay, and 6 electronic tanks for storage of 30 million litres of Premium Motor Spirit (PMS)and 20 million litres of Automotive Gas Oil (AGO) and Dual Purpose Kerosene (DPK) and that contractor assigned construction on the facilities is expected to deliver computerized 50 million litre depot with two-way product jetty.

The Minister of State for Petroleum Resources, Timipre Sylva, commended President Muhammadu Buhari for enabling such a huge project to be situated in Niger Delta and that people of the area would continue to express their gratitude.

Speaking during the execution of the Shareholders Agreement between the NNPC, NCDMB, and Zed Energy recently, Sylva disclosed that the N10.5 billion Brass petroleum terminal project has come in at a time when Niger Delta needed such facilities to boost and make viable economy of the area and that Balyesa state and the project host communities would play a vital role in making the project seeing light of the day.

He said that the establishment of the terminal was an indication of President Muhammed Buhari’s commitment towards making living conducive for people of Niger Delta particularly people in Bayelsa state.

According to the minister, the signed agreement shows the president’s commitment to the enhancement of livelihood of the Niger Delta people and communities across Bayelsa State where people purchase products at exorbitant prices due to logistics challenges associated with transporting products to that area.

He said: “I make bold to say today without any fear of contradiction that no President has impacted the people of the Niger Delta like President Muhammadu Buhari. Aside from what we are witnessing today, remember there is also the Brass Fertilizer & Petrochemical Company, the Oloibiri Oil and Gas Museum, and the Oil & Gas Park in Ogbia, all under Mr. President,” the Minister stated.

On his part, the Group Managing Director (GMD), NNPC, Mele Kyari, hinted that the N10.5 billion petroleum production plants have the capacity to create no fewer than 5,000 jobs when the project becomes completed and that 1,000 site workers and other sub-contractors would also be gainfully employed during the construction of the facility.

Kyari said that the federal government’s aim was to bring job opportunity closer to people of the Niger Delta area through the project, adding that, NNPC was proud to be part of the project which aside ensuring products availability in all nooks and crannies of the area, would also guarantee the nation’s energy security and generate employment.

“This Terminal will create 1,000 direct jobs during the construction phase, and over 5,000 indirect jobs during its operation. Considering the potential for employment when completed, this will definitely reduce youth restiveness in the Niger Delta area and will also address the problem of illegal refining in the area,” Kyari stated.

In his remarks, the Executive Secretary, NCDMB, Simbi Wabote, maintain that the signed agreement between government agencies and private oil firm was as a result of strong interagency collaboration and public-private sector partnership.

“The NCDMB will continue to drive such partnerships across the industry to bring development in Nigeria,” he noted.