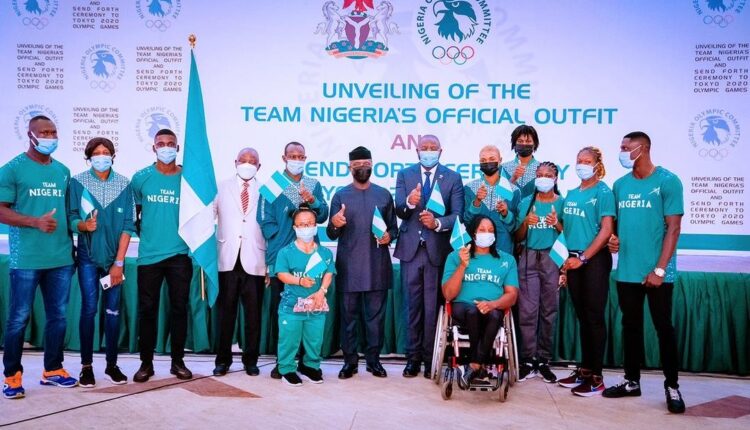 The Vice President, Yemi Osinbajo, has urged the Nigerian team to the Tokyo 2020 Olympics to put in their best as they represent the hopes and aspirations of millions of Nigerians, and that they should garged the highest medals during the competition

The vice president told the athletes that their performance at the tournament would be an opportunity to immortalise themselves and further propagate the sporting and tireless spirit of Nigerians during the games.

He added that it was important that the athletes justify the trust reposed in them by putting in their best whenever they march on the field to participate in any sporting event at the Olympics.

Osinbajo made the call on Monday at the send-off ceremony for Team Nigeria, formal handover of the Nigerian contingent to the Nigeria Olympic Committee, and unveiling of the team’s official kit. The event was held at the State House Conference Hall, Abuja.

Addressing the great Nigerian team to the Tokyo 2020 Olympics comprising of 58 outstanding athletes and 18 world-class coaches, the vice president described the games as the biggest and the most spectacular sporting event on the planet.

According to him, every one of you participating in the games is opening a page in history for yourself, your families, your community, and the nation.

“Your performance at the games will inscribe your names in national and world sporting history; you carry the hopes and aspirations of millions as you compete in Tokyo. But you will in this endeavor have the assurance of the prayers and best wishes of all Nigerians,” he said.

The vice president implored the team to be motivated by the great exploits of former Nigerian Olympians. He cited Chioma Ajunwa who won the gold medal at the 1996 Olympics for the long jump and became the first black African woman to win an Olympic gold medal in a field event.

Osinbajo also made reference to the Nigerian Olympic football team that won gold at Atlanta 96.

“That was the year we defeated the world best footballing nations, Argentina and Brazil and we all held our heads high. And for anyone who thinks we are joking maybe they haven’t seen our exhibition basketball game on Saturday with the USA team especially that amazing block by Precious Achiuwa against KD {Kevin Durant} who is probably the best player in the NBA right now.

“So, Precious, you are the real MVP. And in the year 2000 in Sydney, again we beat the best in the world. We won the gold in 4 × 400 metres relay after the American team was disqualified for using performance-enhancing drugs, that was the team which had Clement Chukwu, the late Sunday Bada, Enefiok Udo-Ubong, Jude Monye, and two other members of the team Fidelis Gadzama and Nduka Awazie.”