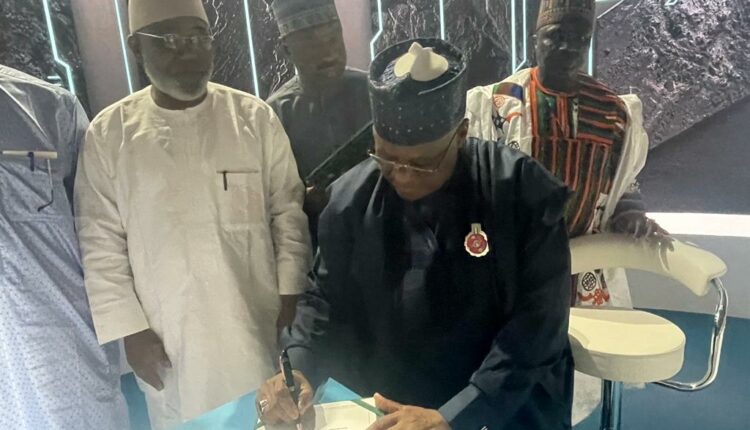 Share
As part of measures to ensure a better pilgrimage for Muslims, the Federal Government through the National Hajj Commission of Nigeria (NAHCON) has signed the 2023 Hajj guidelines agreement with the Saudi Arabian Government.
As gathered, the signing of the Memorandum of Understanding signals the commencement of operational activities for the 2023 Hajj between both countries.
According to MAHCON, the move was to ensure that the 2023 Hajj operation is more successful than previous pilgrimages attended by Nigerians.

Both countries signed the agreement on Monday at the Super Dome event centre in Jeddah, and was witnessed by non-public officeholders

In a statement released by NAHCON after the signing ceremony,  the Minister of State for Foreign Affairs, Zubair Dada, signed the MOU for Nigeria while the head of the Saudi Ministry of Hajj also did for the Arabian country.

According to the statement, the much anticipated Memorandum of Understanding for the 2023  Hajj was signed this morning between the National Hajj Commission of Nigeria (NAHCON)and the Saudi Ministry of Hajj at a colourful ceremony held at the Super Dome Centre in Jeddah Saudi Arabia.

“The Minister of State for Foreign Affairs, Zubair Dada, signed the document on behalf of Nigeria and was witnessed by the chairman of NAHCON,  Zikrullah Hassan, the three executive  Commissioners, Nura Yakassai, Abdullahi Hardawa and Suleman Mommoh, board members and staff of the commission.
“One of the highlights of the document is the confirmation of 95000 Hajj slots to the country in this year’s Hajj with 75,000 allocated to the 36 state pilgrims’ welfare boards /Agency/Commissions including the FCT and Armed forces, while 20000 is allocated to the private Tour operators.
“On the sideline of the Mou, the delegation met with the Mutawwif of African Non- Arab, whose Chairman Ahmad Sindi, assured the country of its readiness to make the 2023 Hajj better than the previous years. He further disclosed that his agency in a bid to create more rooms and space to pilgrims have adopted the use of double deck bed at the Mashair for some countries this year.
“He, therefore, urged the participating countries to work assiduously to achieve a hitch-free Hajj 2023”.