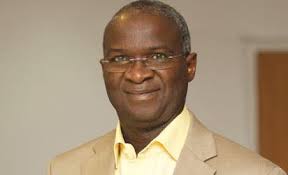 The Minister of Works and Housing, Babatunde Fashola, has urged governors and relevant stakeholders across the 36 states of the federation, particularly those of Lagos, Abuja, Ibadan, Port Harcourt, among other urban cities to intervene in issues bordering on rent being charged by landlords and property owners in the country.

He also suggested the collection of three-month by landlords and property owners from Nigerians seeking to rent property across the country, saying that would make the process easier and affordable for the people and bridge the nation’s housing deficits.

He explained that rather than demanding three-years rent from Nigerians who depend on salaries and profits from their business to service rent, which he argued, has made housing unaffordable for many people in urban areas, three-month payment plans would ensure property without occupants due to exorbitant rent prices are filled up.

He added that contrary to claims that the country has 17 million housing deficits, housing shortages in places like Lagos, Abuja, Ibadan, Port Harcourt, amongst others were a result of urbanisation and affordability which had rendered many adults still putting up in their friends and parent’s property.

Speaking on Thursday at the weekly State House Briefing in Aso Villa, Abuja, the minister clarified that the country was not battling housing crisis but affordability challenges after landlords turn their property to cash cow by demanding exorbitant amounts.

According to him, the housing shortages that exist especially in all parts of the world are in the urban centres, not in the rural areas. It is a problem caused as a result of urbanisation where people move from rural to urban areas and then it creates a supply and demand problem.

“And so, you will find many of the people who are in urban centres like Abuja, Kano, Kaduna, Lagos, Owerri, Port Harcourt, Aba, Ibadan, Abeokuta and those types of places seeking to squat with somebody or trying to rent a house has an empty home in his village

“So, if we understand it like that, then, let us look at the urban centres itself. In the urban centres, you will see that there are still empty houses and you will then understand that we have to discuss housing on two paradigms – ownership and rental – because no nation provides full ownership for all of its citizens.

Speaking further, the minister urged states to intervene in the management of rent “because as long as people have to pay three years rent from salaries that are earned monthly in arrears, there will be the problem of affordability but if you brought it to like three months in advance, there is something still called salary advance in the private sector,” then people will be able to afford it.

“Most of the properties affected by this lack of occupation belong to private people so the government can’t go and take their properties but I think that by persuasion, by intervention through state legislation, we can bridge some of this,” he added.