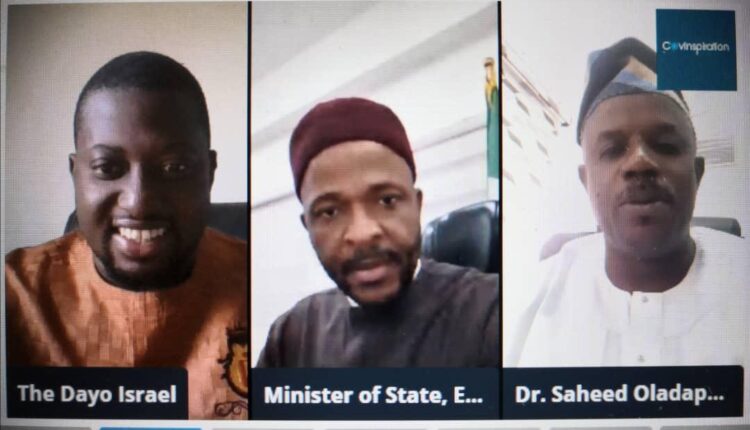 Share
After a thorough review of the education sector of the country, the Federal Government has disclosed plans to address challenges confronting teaching profession that had made it not attractive to many in the country.

The government said that it was planning to introduce policies and programmes that would make the noble profession more attractive to Nigerians particularly the youths and next generation.

It said that the policies and programme under consideration was one that would attract committed and brilliant personnel to embrace teaching profession which has become a major challenge facing the country’s education system.
The minister of State for Education,  Chukwuemeka Nwajiuba, disclosed the plans yesterday on a special virtual dialogue show, CovInspiration, put together by a British Council Global Changemaker, Dayo Israel, and attended by Dr. Saheed Oladapo, a permanent board member of Lagos State Universal Basic Education Board (SUBEB).
Nwajiuba, who spoke on education in emergencies and the future of learning in Nigeria, dispelled the notion that infrastructure was the major challenge confronting education, saying, what is the importance of good structure without sound minds to maintain it.
The minister stressed that efforts would be made to ensure that salaries are attractive to keep current teachers in classrooms and make others outside to view teaching as a profession that worth dedication, adding that it was not enough to build infrastructures and not train the child that will use the building.
According to him, so, we are looking at programmes that can help bring back that the glamour in teaching profession and attract passionate and best brains to embrace it.
On some of the strategies that would be used to actualize the plans, the minister noted that the governors would be persuaded to get their commitment towards the plan.
“And that is why we have to talk to the state governments because many states do not pay teachers salaries on time and those that pay, the teachers’ salary is not commensurate with what they expected.
“I remember some youths I met at a College of education recently and during our discussion they told me that ladies do not want to marry teachers again. And for me that is sad.
“Today, everyone is migrating to the private sector and when we all do that, who will produce the workforce for the country if we all become the sons and daughters of the big men in the society. I have five children and they are all studying in public institutions”.

The minister, who expressed his passion to ensure that the public tertiary institutions in the country become attractive to Nigerians and foreign students, disclosed that his children attends public institutions.

Three corps members, 29 others in EFCC net over cybercrime, fraud