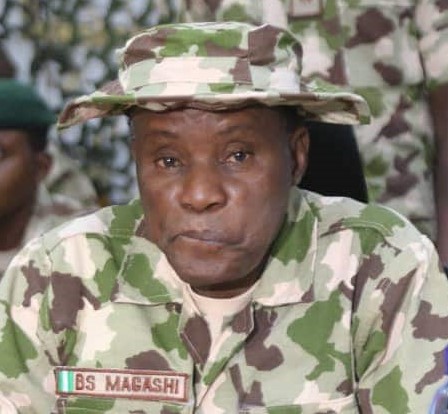 The Minister of Defense, Maj-Gen. Bashir Magashi, has said plans have been concluded by the Federal Government to recruit more soldiers to end insurgency, particularly activities of Boko Haram and bandits across the country.

Aside from recruitment of soldiers, the minister maintained that the government would be reviewing its anti-corruption strategies and adopt more stricter strategies in defeating the enemy of the state.

Magashi expressed optimism that recruitment of soldiers with professional skills and fighting equipment with strategies could route out remnants of terrorists from their hideouts.

The minister disclosed this on Sunday while addressing troops at the Military Command and Control Centre, Maiduguri, the Borno state capital.

According to him, the over a decade long terrorism has claimed 36,000 lives with property worth $9.2 billion, about N3.42 trillion in Borno, Adamawa and Yobe states.

He added that in winning the war against terrorism, there was need for the deployment of more soldiers to Sambisa Forest, Lake Chad region and the Mandara Hills, inevitable to end the war.

While appreciating the efforts of troops at the parade ground yesterday, he said: “It’s only you that could perform professionally in the theatre of war.

“We count on each and every one of you in the front lines of the forest and Lake Chad region to end the over decade insurgency,” he said.

The Minister also tasks the soldiers to fight the insurgents to their knees, until they are completely routed from their hideouts in Borno and Yobe states.

While reviewing the counter-terrorism operations, he said: “I’m here today in Maiduguri to assess your fighting spirit, before we could unfold a plan on how to end this war.

“We also believe in your commitments and the professional skills of fighting Boko Haram insurgents to end the war,” he said; noting that the over a decade long terrorism has claimed many lives and property in the region.

Plateau to generate N18m monthly through potatoes markets, others