By NewDesk, with Agency report 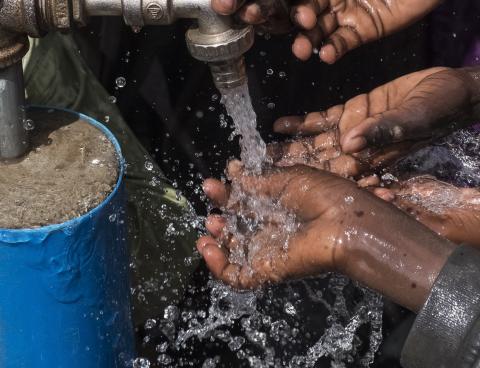 As part improve access to safe water supply and sanitation across the nation, the Federal Government has officially inaugurated the implementation of the second phase of the Partnership for Expanded Water Sanitation and Hygiene (PEWASH) programme in 10 states.

The Minister of Water Resources, Mr Suleiman Adamu, said that after the programme started in two pilot states of Kano and Ogun, with its accompanied success, it becomes imperative to launch it other states to ensure the new partnership and intervention with the states would take into consideration steps to curb the spread of COVID-19 pandemic.

He listed the 10 states that met the criteria for the immediate intervention to include Katsina, Plateau, Bauchi, Jigawa, Sokoto, Zamfara, Ondo, Osun, Imo and Delta.

The Minister noted that it was important for communities in the 10 states to take ownership of the programme to enable them benefit from the overall gains.

According to the minister, 33 states have signed the PEWASH protocol, expressing interest to partner with the ministry and expressed hope that remaining states of Anambra, Rivers and Borno and the FCT would also show interest.

Adamu said a total of 119 contractors were selected, with strict compliance to Procurement Act, saying 56 local government areas have been selected as beneficiaries.

“We have recently awarded contracts for the construction, rehabilitation and upgrading of 895 water supply facilities at the cost of N2 billion in the 28 local governments areas under the federal government components.

“Upon completion, it will improve access to water supply to about one million people living in the areas, that is what we are flagging off today.

“While congratulating all the contractors, I will like to stress the high premium this ministry places on Qualitative and timely delivery and therefore charge them to execute these projects with utmost diligence, standard and strict compliance to contract specifications. “

The minister said for the full gains of the PEWASH programme to be realised, it was important for the states to have equal commitment in line with the covenant of the joint protocol signed.

He added that it was the desire of the Federal Government to see that access to water and sanitation was improved so as to meet the Sustainable Development Goals by 2030, and the National Open-Defecation Free target by 2025.

On intervention towards COVID-19 pandemic, Adamu said the ministry had developed a Water, Sanitation and Hygiene (WASH) Sector Emergency Response Intervention Fund of N9.8 billion, approved by the National Assembly under the 2020 Revised Appropriation Act.

He added that a WASH sector COVID-19 National response team was already in place, which has all state commissioners of water resources as members, meeting regularly to share ideas to move the water and sanitation sector forward.