Inspite of Lagos leading the chart of states battling coronavirus in Nigeria, the State Government has disagreed with the Federal Government on the number of deaths recorded since the first case was discovered several weeks ago.

NCDC, in a statement on its website, claimed that Lagos state has recorded 21 casualties but the State Government responded with a message on the Ministry of Health official social media handle on Thursday, stressing that the number of deaths remains at 20.

Before the State Government debunked NCDC claims on the death toll, the agency had said that 196 new cases were discovered across the country with Yobe State joining the chart yesterday.

Also responding to the alleged misinformation, the commissioner for health, Prof. AkinAbayomi, on his official social media handle, hinted that the only casualty recorded on Wednesday was a 25-year-old coronavirus patient.

Abayomi said: “Unfortunately, one COVID-19 death was recorded. The deceased, a 25-year-old male, was at the time of admission in a state of severe breathlessness. This brings the total number of COVID-19 related deaths in Lagos to 20”.

Also, the Public Affairs Officer for the ministry, Tubosun Ogunbanwo, told our correspondent that the health team in Lagos’ major concern is how to gain control over the virus in the state. 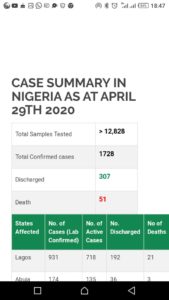 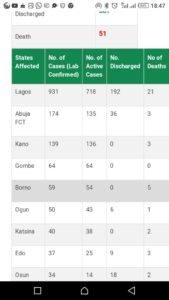 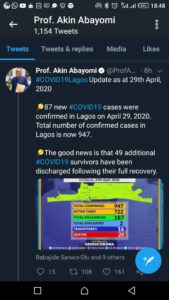