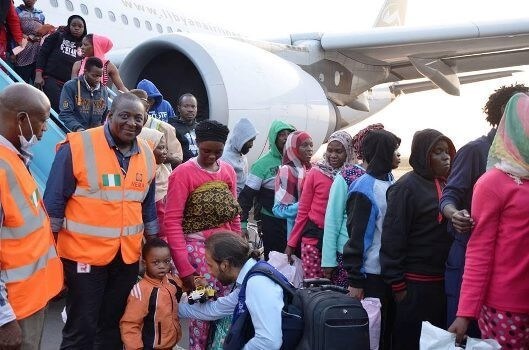 No fewer than 162 stranded Nigerians have been rescued prepared for airlift back to Nigeria and would be placed under fourteen days of compulsory isolation in line with the Federal Government measures to curb spread of coronavirus.

As stated, the 162 repatriated Nigerians are expected to arrive Nigeria on Wednesday via the Murtala Mohammed International Airport, Lagos, with more to be evacuated in the coming weeks.

The feat was said to have been achieved after the International Organisation for Migration (IOM), and the Nigerian Mission in Tripoli joined forces together which led to successful repatriation of the Nigerians stranded in Libya.

Confirming the development, Charge d’ Affairs of the Nigerian Mission in Libya, Kabiru Musa, said that the evacuees included victims of human trafficking and irregular migrants on voluntary return, who took Libya as a transit country, amongst others.

Musa said that the repatriation exercise was part of IOM’s humanitarian voluntary return of migrants to their home countries, some of whom encountered challenges of deprivation, loss of freedom, violation of their rights and maltreatment.

He said that the IOM and the Nigerian Mission in Libya, supported by the Federal Ministry of Foreign Affairs, evacuated the stranded Nigerians after intervening in rescuing them from Libyan detention facilities.

He added that the move was part of the efforts of the Nigerian government to ensure that none of its citizens remains stranded, unlawfully detained or maltreated in any foreign country.

“Over 4,000 aliens, including vulnerable women and children, were arrested during the operation and detained in overcrowded facilities. The Nigerian Mission, as part of its consular responsibilities, intervened and secured the release of some of the detained Nigerians and thereafter sought the assistance of IOM for their safe return to Nigeria.

“The repatriation exercise with the support and close cooperation of the Ministry of Foreign Affairs, Abuja, the Libyan Authorities, IOM Libya and IOM Nigeria was conducted in full compliance with COVID-19 guidelines.

“On arrival, the returnees will be received by the IOM in Nigeria, where they will be expected to spend few days with the Organisation before they will be provided with transportation to their various destinations. The most vulnerable ones among them are to benefit from re-integration assistance by IOM,” Musa said.

Musa stated that before their departure, he advised the returnees and intending irregular migrants to look for opportunities at home rather risking their lives on perilous journey in search of elusive greener pastures.

He said that the Mission was committed to facilitating the return of many stranded migrants through the Federal Government’s intervention, as well as IOM’s humanitarian voluntary return programme. He said that another batch of 165 Nigerians would be returned to Nigeria from Libya’s Eastern City of Benghazi on November 4.