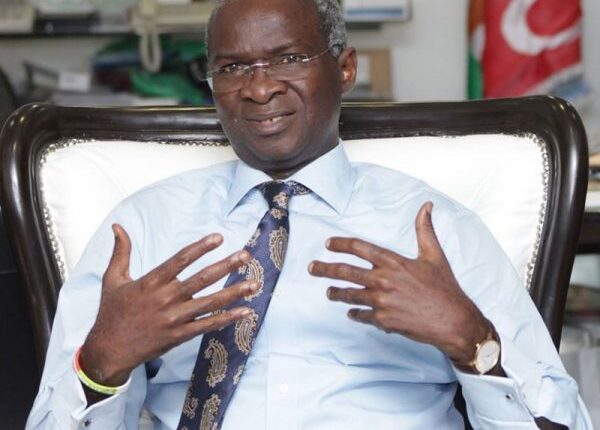 The Minister of Works and Housing, Babatunde Fashola, has reiterated President Muhammadu Buhari’s administration commitment to completing the construction of Lagos-Ibadan expressway and the Second Niger Bridge.

He explained that works on the Lagos-Ibadan expressway have reached about 90 kilometers in both sections and that efforts were being intensified to ensure contractors meet up with the 2022 deadline.

While addressing House of Representatives Committee on Works on Wednesday in Abuja to defend his ministry’s 2022 budget, Fashola said that though efforts were been intensified to meet the deadline, the ministry was currently indebted to contractors to the tune of N420.58 billion for work done.

He also said that the apex government would require about N7.430 trillion to fund about 854 ongoing highway contracts spread across the six geopolitical zones.

“The Lagos/Ibadan express road is scheduled for completion in 2022. At the moment, we have done cumulatively about 90 kilometers in sections one and two. For the second Niger Bridge, the plan is to complete it in 2022 and it is on schedule. The contractors tell us that the bridges will be fully connected by the end of quarter one in 2022.

“So, by the end of the first quarter, you can walk on it from the beginning to the end. We lost some time during the COVID but they are working to gain the time lost,” the minister said while responding to questions from the lawmakers.

Speaking on the on tax credit, he said: “This scheme was initiated by the previous administration. So, it is an inherited policy but it was not implemented. It was in 2016/2017 when we were looking for how to fund the budget that I came across it and the first project was the Obajana/Kabba road.

“The policy we inherited had a sunset date and so was going to lapse and we thought this was a useful way of finding money to fund some projects and so, we recommended to Mr President and he approved that we should continue with it. We then set up a team and certain governance rules were put up.

“Right now, there is a committee that sits in governance over the scheme headed by the Minister of Finance, Budget and National Planning. Nothing moves unless it passes through that committee.”

Going back to fetch more bodies from the rubble (photo)