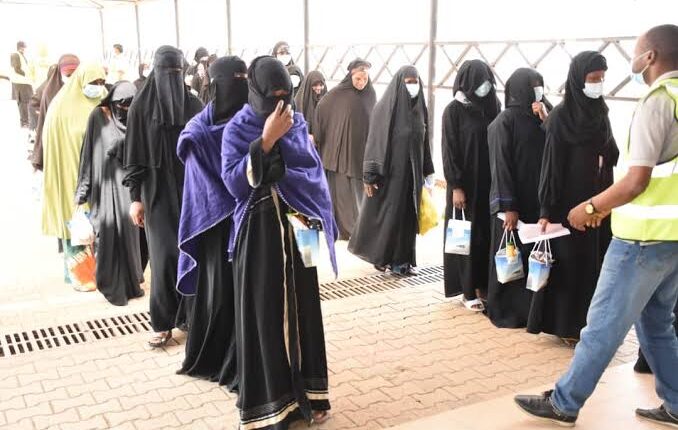 As part of measures aimed at ensuring resettlement and reintegration of repatriated Nigerians, the Federal Government has handed over 200 returnees from Saudi Arabia who are indigenous to Kano State to the state government.

It explained that the returnees reunion with their respective state governments followed their coronavirus free certification and other quarantined regime which they have passed through with pass mark for their reunion with members of the society.

The Ministry of Foreign Affairs said that though the 200 were handed over to Kano State government on Tuesday, the reunion exercise had commenced since January 2021 across the country.

The Ministry’s Director of Consular and Legal Department, Ambassador Bolaji Akinremi, explained that not only were the returnees handed over to the state government, the apex government has also put necessary measures in place to ensure smooth resettlement and give them a new lease of life.

“They were 389 returnees from Saudi Arabia, followed by 425 and later lesser number of 39; today we have 1,319 altogether on the FCT Muslim Hajj Camp Ground.

“These are those who came in different batches, we have had a batch of over 300 or 400 three times and then we have the small pocket here and there,” he said.

According to him, after the last round of COVID- 19 tests, everybody still on the camp ground would be handed over to their respective state governments.

Receiving the returnees on behalf of Kano state government, the Director-General of Kano Investment Promotion Agency and Diaspora, Hama Aware, commended the apex government and Nigeria Diaspora Commission (NIDCOM) for their support and swift intervention in ensuring the citizens were repatriated from their host country without hitches.

The swift response, she said, ensure that the returnees were handled with care and gave them a sense of belonging and pride of place in their father’s land.

“On behalf of the Governor of Kano, Abdullahi Ganduje, we thank you for putting things in place to cater for all the returnees. We had more than 1,000 Kano citizens that have returned from Saudi Arabia; Kano had the largest number of returnees among others currently with over 310 citizens.

“So far, some of them have left, but we were here on Saturday, Feb. 6, to take their data. We have over 150 Kano citizens that are still in the camp and we are here with vehicles provided by the Kano government to carry our citizens back to the state,” she said.

She revealed that necessary measures had been deployed by the state government to support the returnees to arrive home safely and also sensitise them on illegal migration.

Five females, 53 others under detention for fueling Lagos-Island unrest