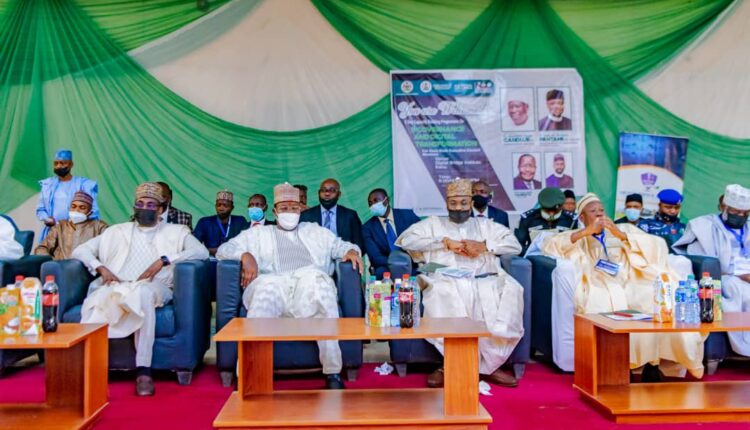 As part of the effort to ensure public officeholders perform their task incompliance with global best practices, the Federal Government has equipped members of the Kano State Executive Council on e-Governance and Digital Transformation skills in the state.

The central government said that the programme was put up to give special training to the top government officials on modern technology that should be adopted in order to improve their performances and deliver services to the public.

Some of the participants of the 2-day event, which commenced yesterday, was attended by the state Governor, Dr Abdullahi Ganduje, his Deputy, Dr Nasiru Gawuna, Secretary to the State Government, Usman Alhaji, Commissioners, and other members of the Executive Council of the state.

While making his address, Ganduje commended the Federal Government, particularly the ministry for initiating the training and other initiatives, including training of over 1000 youths on digital skills and other supports provided in the state.

The governor commended the Minister of Communication and Digital economy, Dr. Isa Pantami, for matching words with action, adding that the e-governance training was as a result of his visit to the Communications and Digital Economy Complex in Abuja where he initiated talks on the possible collaboration and partnership with the Ministry to foster ICT development in Kano state.

He reiterated that his administration’s commitment towards realization of ICT policy in the state, saying this has been a critical element to governance, and his administration is making efforts to ensure the state taps into the immense benefit of e-Governace and digital technologies by simplifying government operations as well as limiting government spending.

He said, “It is imperative we apply the new system being used anywhere in the world, because the old system of government would not move the state forward.”

The governor assured that he would continue to come up with ways to streamline government operations and reduce the cost of running his administration.

On his part, Pantami noted that the training was the first of its kind in Nigeria at the state level, and there cannot be a better place to start than Kano State considering it’s importance to the country’s development.

The Minister, while delivering his keynote address, added that Kano was the most populous state in Nigeria and the commercial nerve centre of Northern region of the country.

He said, historically, the people of Kano have always been known to be hardworking and industrious. “They were among the first people to establish major industries and conglomerates in Nigeria, trading in food and drinks, textile and footwear, tanning, ceramics, and furniture,” he added.

Pantami stated that the commencement of the programme makes Kano State Executive Council Members the first beneficiaries, which at the end, Kano will be well positioned to develop a strong digital economy, and have a transformational impact on the state and the nation at large.

He said that in light of global trends in the delivery of government services which is increasingly being characterized by the digitization of processes, the Federal Ministry of Communications and Digital Economy developed the Nigerian e-Government Master Plan (Ne-GMP) with the vision “to create a world class, open and digitized government that connects with people to drive efficiency in public administration, responsiveness of civil services and transparency in governance leading to improvement of the quality of life of Nigerians”.

“This is in line with the Ministry’s mandate to Utilize ICT to drive transparency in governance and improve the quality and cost effectiveness of public service delivery in Nigeria. The Plan was developed with specific strategies that will improve the quality of citizen’s lives by enhancing national competitiveness, facilitating market economy, promoting participatory democracy, and improving transparency in the public sector.

“These strategies include the expansion of the number of public sector personnel trained on e-Government and the publicizing of e-Government initiatives at the Federal and State Level. Various Capacity Building Programs have therefore been developed to aid the attainment of this goal,” he said.

Pantami stated that the National Digital Economy Policy and Strategy (NDEPS) was developed and launched in 2019 to reposition the Nigerian Economy in order to take advantage of the many opportunities that digital technologies provide. “This is in line with the vision of President Muhammadu Buhari to diversify the economy of Nigeria away from the dependence on the oil and gas sector, he said.

“As you may know, the NDEPS is anchored on eight (pillars, one of which is the Digital Literacy and Skills Pillar which provides policy backing for massive training of Nigerians from all works of life in order to enable them obtain digital literacy and other digital skills. An objective of the NDEPS is to support training and Capacity Building among public sector employees in the development and use of digital tools and applications to improve the delivery of government services.

“Furthermore, the Service Infrastructure Pillar provides support for Government Digital Services and the provision of robust digital platforms to drive the Digital Economy. This pillar supports the provision of a online platforms for government to interact with citizens and investors. It supports the deployment of government digital services and a paperless system. A key objective of the Service Infrastructure Pillar is the implementation of the e-Government Master Plan,” he added.

He emphasized that a lot can be achieved together, especially in e-governance and digital transformation which has five milestone; firstly, is about moving government services online for users to conveniently access government services as well as cost reduction, while the second one is to have open data for the state to engage its citizens, getting more information and data economy; and the third is using digital technology to inform decision easily by the data you have.

He said the fifth one is to make the government smart by using emerging technology to predict what is going to happen, what the citizens are going to think and how to shape and equip the citizens’ mindset within the state.

“The programme is about how to design digital economy, position Kano State Government to key in to the Federal Government digital economy initiative, and this can be done through aligning three things: people, processes, and the technology. And this training is going to expose you, build your capacity to make governance easier,” he added.