Boat operator, three others under detention over accounting… 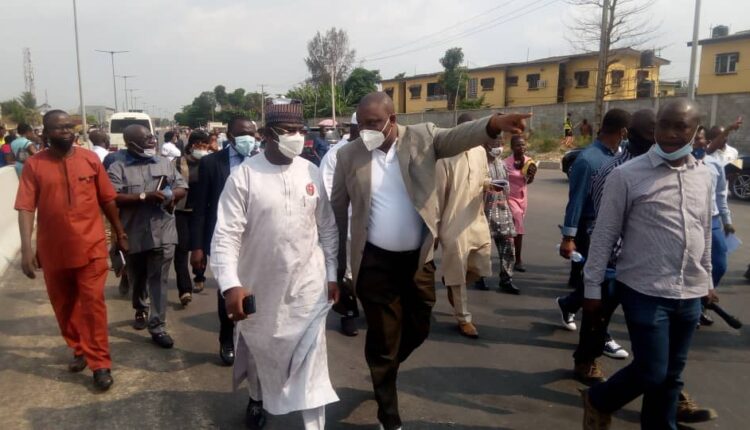 The Federal Government has said that the increase in its expenses in the proposed 2021 budget of N13 trillion remains a veritable solution to get Nigeria out of recession.

It added that for the country to get out of recession in due time, none of the citizens currently employed must be retained and that efforts must be made to keep others busy in production in order to stimulate the economy towards sustenance and development.

The Minister of state for Budget and National planning, Clem Agba, who made the clarification on Tuesday during a two-day working visit to Lagos State Resilience Office, Ministry of Economic Planning and Budget, to inspect major projects listed in the 71 resolution of the National Economic Council (NEC) covering seven thematic areas including infrastructures.

Agba, who was received by the Commissioner for Economic Planning and Budget, Sam Egube, and the Chief Resilience Officer for Lagos, Arc. Gbolahan Oki, described the recession period as a period when the government must increase expenses to stimulate the economy.

He added that during a recession, the government must ensure that citizens have money at their disposal to produce goods and render services that would boost the economy.

“In a recession, the government must be ready to spend more because when you are having less Gross Domestic Products (GDP), that is when the country gets into recession. And one of the best strategy for the country to leave existing jobs and create new employment opportunities across the country.

“For any country to get out of it, the government must ensure that the citizens have more money at hand for businesses against keeping money in financial institutions.

“And in the case of Nigeria, many believe that when there is a recession, the government should reduce budget and expenses but that is not true. What recession means is that the country has had two quarters of negative GDP growth and GDP itself is the total value of the goods and services done in the country. If we need to exit recession, one needs to pump in more money to exit recession. And that is what we are currently doing. And that was why our third quarter GDP result was better than the second quarter”, the minister added.

Agba, however, allayed the fears of Nigerians over the government borrowing strategy, explaining that the funds secured were not to pay salaries but to finance capital projects that could boost the economy.

He stated that the loans were secured considering the benefits and low moratorium placed by them, saying, the lenders were lenient after they realized that the funds were for infrastructural development.

“The country, because we want to grow above our means, we have decided to borrow not to pay salaries but to finance projects that will bring development across the country. And do not forget that the Lagos-Ibadan rail line has commenced operation, the Ajaokuta-Alaja rail has also started and that was a project that was abandoned for 33 years. but this administration has completed it and it has started running. The Abuja-Kaduna rail has also commenced operation.

“All these projects, if not done today, would need to be constructed tomorrow and that will come at a higher cost. It is better to do it today when the terms and conditions are right. And the kind of financing that we are having, it is concessionaire rate, it is like one percent with a long-term moratorium. So it is practically a dash that we are getting.

The Commissioner stated that the visit was basically to view some of the completed and ongoing projects that were designed to boost development in Lagos.

Egube stated that the minister had earlier been intimated on the unified fibre duct which was approved by the Lagos State House of Assembly to boost internet connectivity.