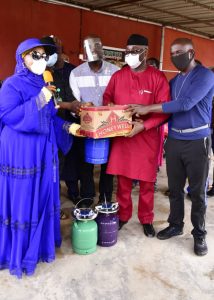 As part of activities to mark the Nigeria 60th Independent anniversary, the Federal Government has donated relieve materials to Abuja flood victims.

The government through the FCT Minister of State, Ramatu Aliyu, gave out 50 pieces of cooking camp gas and assorted food items to residents of Trademore Estate in Lugbe area of Abuja Municipal Area Council, recently ravaged by flood.

Aliyu said that the frequent rain pour has caused more harm to residents leaving close to river banks and drainage and such incidence has led to the loss of lives and property.

The minister, who visited the scene of the flood in Abuja, said that the gesture was part of activities to mark Nigeria’s 60th independence anniversary and as well commensurate with victims that have lost their life savings to the disaster.

He appealed to residents to stay off waterways while assuring that the Federal Capital Territory Administration (FCTA) would approach the Ecological Funds Office for assistance.

“Despite my tight schedules, I still find it pertinent to come here in person to commensurate with you over the loss of our brother lives and the wanton destruction of property.

“I am here to also appeal to you as much as possible before any intervention from the ecological funds’ office or any relevant government agencies to stay clear of waterways”. He added.

Aliyu commended residents of the estate for demonstrating maturity and a sense of patriotism during the disaster, stressing that governance was a collective responsibility.

“We feel your pains and we know what it means to lose a life. I want to also thank you for your patience and understanding with the government and the situation we find ourselves in,” Aliyu said.

The minister used the occasion to task Nigerians to celebrate the 60th independence anniversary of the country, noting that in spite of the challenges faced by the nation, Oct. 1 was worth celebrating.

Earlier, the Chairman of Trademore Estate Phase 3, Adewale Adenaike, commended the minister for her prompt response to the flood victims.

He appealed to the Federal government to address the situation urgently before it got out of hand.

Adenaike also stated that the ecological problem in the estate was beyond the capacity of the Abuja municipal area council; hence, the need for the intervention of the ecological funds’ office to come to the aid of residents.