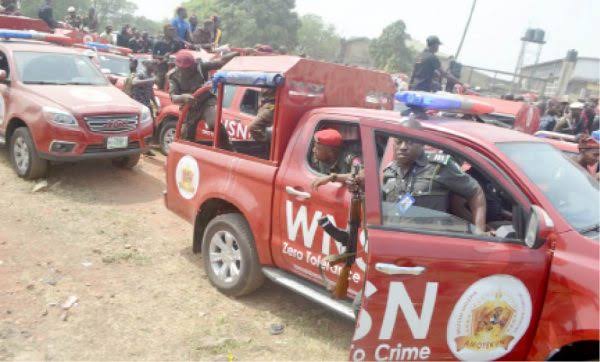 Not minding number of deaths recorded due high rate of insecurity in South-west states which warranted establishment of a Paramilitary outfit tagged Operation Amotekun, Federal Government has condemned the initiative embarked upon by Governors in the region, declaring it as illegal.
The Federal Government argued that the establishment of the paramilitary outfit completely violates several sections of 1999 constitution where roles of each arms of government, including divisions within each, were properly spelt out to avoid infringement.
Condemnation of the Paramilitary outfit came barely a week after Ekiti State Governor, Kayode Fayemi, led his Ondo State counterpart, Rotimi Akeredolu and four others to launch Operation Amotekun.
The decision to launch the paramilitary outfit emerged last year following serial killings and kidnapping by the Fulani herdsmen; and it was reached at a summit convened by the Development Agenda for Western Nigeria in June.
And since the launch, several notable Nigerians including Nobel Laureate, Prof. Wole Soyinka, have commended South-west governors on establishment of Paramilitary outfit tagged Operation Amotekun,
Office of Attorney General and Minister of Justice, Abubakar Malami, in a statement released on Tuesday by Special Adviser, Media and Public Relations in the office, Dr. Umar Gwandu, said that no state government has the right to establish such in the country.
“The setting up of the paramilitary organization called “Amotekun” is illegal and runs contrary to the provisions of the Nigerian law.  The Constitution of the Federal Republic of Nigeria 1999 (as amended) has established the Army, Navy and Airforce, including the Police and other numerous paramilitary organisations for the purpose of the defence of Nigeria”.
It argued that Nigeria is a sovereign entity and governed by laws meant to sustain its corporate existence as a constitutional democracy.
According to the statement, it is a Federation of states, but with the Federal Government superintending over matters of national interests.
“The division of executive and legislative authority between the Federal and State Governments has been clearly defined by the Constitution of the Federal Republic of Nigeria 1999 (as amended).
“It is against the same background that matters relating to the peace, order and good government of the Federation and in particular, the defence of the country, are enshrined in the Exclusive Legislative List. The Second Schedule in Item 17 deals with defence. This is a matter that is within the exclusive operational competence of the Federal of Government of Nigeria. No other authority at the state level, whether the executive or legislature has the legal authority over defence.
“As a consequence of this, no State Government, whether singly or in a group has the legal right and competence to establish any form of organization or agency for the defence of Nigeria or any of its constituent parts.  This is sanctioned by the provision of Item 45 of
the Second Schedule of the Constitution of the Federal Republic of Nigeria (as amended) authorizing the Police and other Federal government security services established by law to maintain law and
order.
“The law will take its natural course in relation to excesses associated with organization, administration and participation in “Amotekun” or continuous association with it as an association.
“Finally, it is important to put on record that the Office of the Attorney General and Minister of Justice was not consulted on the matter. If it had, proper information and guidance would have been offered to ensure that Nigeria’s defence and corporate entity are preserved at all times”.