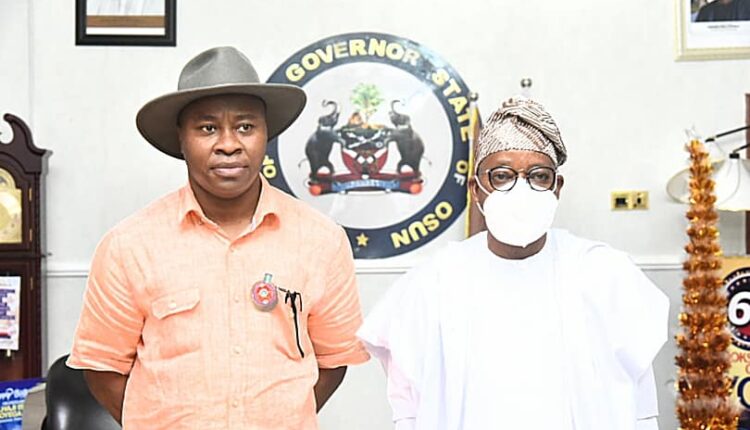 The Federal Government has commended the administration of Governor Adegboyega Oyetola of Osun State for the huge investment made to revive the agriculture sector, including ongoing farming programmes across the state.

This as the apex government also lauded the state government for keying into many of its policies aimed at revamping, resuscitating, and rejuvenating the agriculture sector for greater and maximum productivity.

With his commitment and investment, the central government expressed readiness to commence all-year-round farming in Osun as part of efforts to cushion security and avert the possible effect of food scarcity in the dry season.

Ikonne said that he was in the state to assess and access the expanse of lands suitable for all-year-round farming as the nation was approaching dry season in line with President Muhammdu Buhari-led administration’s commitment to reviving the agriculture sector and making it the bedrock of the nation’s economy.

Addressing journalists during his tour of some of the farm settlements in the state, Ikonne said the team came to Osun on the directive of Buhari to aggregate suitable lands for all-year-round farming and work out modalities to retrieve all the already- acquired lands under the agency.

He said Osun was chosen as one of the piloting states, having attested to the government’s commitment to revamping the sector.

The NADAL Executive Secretary who extolled the commitment of Governor Oyetola towards the actualisation of the national economic diversification expressed satisfaction at the available suitable lands provided by the State government to drive and actualise the initiative.

He disclosed that the all-year-round farming process would commence in Osun by the first week of January, 2021 as necessary facilities had been provided by the President to actualise the dream.

“We are here on the spot assessment of the land donated to the National Agricultural Land Development Authority (NALDA) for dry season farming. We want to see whether the available lands are suitable for farming, especially dry season farming.

“Going by the places we have visited in Osun, you will agree with me that youths in this state will be making huge money because, with this Scheme, there is no more idleness, no more poverty, and hunger. There will be full supply of necessary farm equipment, inputs, and technical support which include capacity training, capacity building, and human capital development.

“So, I am extremely excited that Osun is keying into the lofty initiative of President Muhammadu Buhari to resuscitate the agriculture for the betterment of the citizens, because with the natural resources that Osun is endowed with, there are better days ahead for the citizens, particularly the youth.

“Osun stands to gain a lot from this partnership as unemployment, poverty, hunger and idleness which had been the source of youths restiveness would be eradicated. The State will also benefit greatly from the Scheme in its onerous efforts to empower her citizens and expand its food production capacity.

“I am excited by the commitment of Governor Adegboyega Oyetola to turn around the fortune of agriculture and make the sector the mainstream and bedrock of the State’s socioeconomic development. I am equally glad that he is following the footsteps of Mr. President to revive agriculture sector”, Ikonne added.

In his remarks, the state’s Commissioner for Agriculture and Food Security, Dayo Adewole, said the Administration of Governor Oyetola would do everything possible to ‘walk the talk’ and bring the initiative to fruition.

Adewole who urged the citizens, particularly the youth to key into the state’s laudable policies on agriculture by showing interest in farming, assured the government’s readiness to provide necessary support capable of repositioning the sector for mass employment opportunities and food productions.