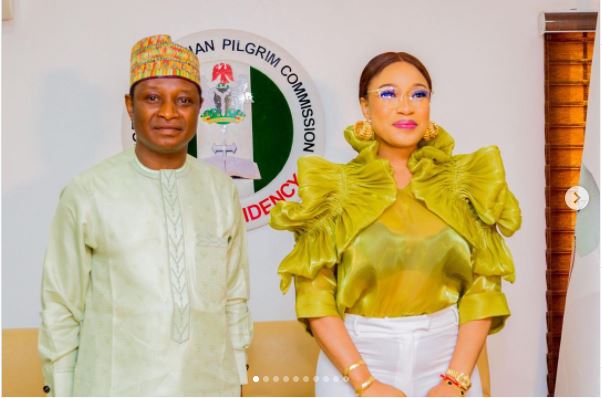 The Federal Government has denied appointing multi-award-winning actress, Tonto Dikeh, as Peace Ambassador for Nigeria Christian Pilgrim Commission (NCPC) and appealed that Nigerians should disregard any claim from the actress.

The government said that there was never any discussion between NCPC and the actress on appointing her as an ambassador for the agency, describing the claim from Dikeh as false and a figment of her imagination.

This came hours after the star actress took to her official social media pages and announced the NCPC appointment; an announcement that had attracted several commendations from her fans.

Denying the announcement, Head Media and Public Relations for NCPC, Celestine Toruka, in a statement released yesterday, disclosed that the agency was surprised that the actress, founder of Tonto Dikeh Foundation, who never discussed ambassadorial role during her visit could go on social media to claim it.

Toruka said that the claim by Dikeh was a clear misrepresentation of what transpired during her visit to office of NCPC’s Executive Secretary, Yakubu Pam, on 25th February, 2021 at the corporate headquarters of the Commission in Abuja.

While describing the claim by the actress as spurious, the Commission’s spokesperson stressed that during the visit, Dikeh cashed in on the discussion with Pam to commend NCPC boss for his positive and relentless peace initiatives across the country.

Toruka added that during the discussion that lasted for several minutes, she expressed her willingness and interest in partnering with the Commission on peacebuilding and that it was welcomed.

“However, we are suddenly inundated with claims from King Tonto Dikeh herself that she has been officially appointed as Ambassador of peace by this great Commission. This claim has gone viral in the media.

“The Commission frowns at this claim which is a clear misrepresentation of what transpired. The fact remains that the Executive Secretary of NCPC never appointed King Tonto Dikeh an Ambassador of Peace for NCPC and this was not part of her visit therefore this claim by her is spurious, unfounded, and should be discarded and seen by all Nigerians as a figment of her imagination.

“Nevertheless, we appreciate her desire to partner with us in our peace-building initiatives and in the area of pilgrimage sponsorship to the Holy Land”, NCPC spokesman added.