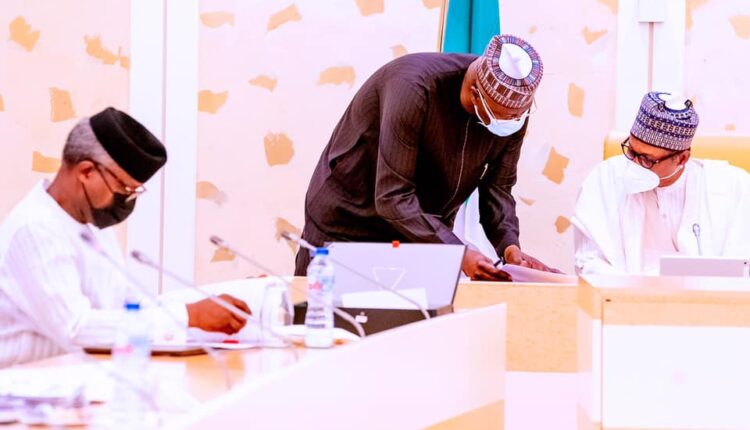 As part of measures aimed at improving power supply across Nigeria, the Federal Executive Council (FEC) has approved more than $8.29 million as well as N3 billion for execution of various electricity projects in the country.

Aside from the projects, the government also disclosed that plans have been concluded to begin the second phase distribution of four million free pre-paid electricity meters to Nigerians.

The Minister of Power, Engr Mamman Saleh, said that the projects alongside the distribution of free pre-paid meters were part of measures carefully outlined by President Muhammadu Buhari-led administration to improve power supply across the nation.

Briefing State House Correspondents on Wednesday after the virtual Federal Executive Council meeting presided over by the President at the Presidential Villa, Abuja, the minister said that the projects approved by FEC are procurement of equipment as well as designs and manufactures.

According to him, some are for the upgrade of the nation’s electricity facility and improvement of power supply across the country. The aggregate of all the figures, in both naira and dollar denominations, summed up to a total of N6,156,168,822, when the dollar component was converted by the official exchange rate of N380 to $1.

“The Federal Executive Council today approved six memos under the Ministry of Power. The first one is the award of a contract for design, manufacturing, and supply of critical spare parts for Crompton Greaves 330 kV, 132 kV and 33 kV circuit breakers to Messrs. Legen Engineering Nigeria Limited in the sum of N298,339,887.04.

“The second one is the award of the contract for the procurement of 50 sets of 400 AH battery banks, 30 to 50 volts and 30 number of 110 volt battery charges for the substation used by the TCN in favour of Messrs. DTS Transformers Electric Industry Limited at the sum of N644,805,953.10.

“The third award of contract is for the procurement of 50 cent also of 132 kV isolators for the TCN in favour of Messrs. Leading Diagonal Engineering Nigeria Limited in the sum of $840,650 plus N53,900,000 within the delivery period of six months.

“The fourth one is the award the contract for the design, manufacturing and the supply of three 60/66 MVA 132kV power transformers with accessories and 15 number of 500 kV transformers, 33/0.415kV earthing transformers for the TCN in favour of Messrs. Zhenjiang Transformers Company Limited, in the sum of N1,296,953,044.55 with delivery period of 12 months.

“The fifth one is the award of the contract for the design, supply and installation of Optical Wire (OPGW) and Universal Optical Transportation Network System (OTN) for some critical transmission lines in favour of Messrs. Xinjiang Power and Transportation Company Limited in the sum of $6,800,743.51, plus N668,843,634.74, with a delivery period of 12 months

“The last one is the upward review of the contraction for the design, manufacture, supply, installation and commissioning of 1X 100MVA, 132/33kV power transformers at Ogba Transmission Substation, Lagos, in favour of Messrs. Power Control and Appliances Limited, in the sum of $648,038.31, plus N48,342,524.18, with the delivery period of six months. All these procurements are geared towards upgrades of the transmission system, to the national grid, so that we can have sufficient power supply to the nation”, he said.

The minister said that the government was making frantic efforts to ensure that power supply was stable and also working towards ensuring that it upgrades the supply from 4000 megawatts to 7000 megawatts.

“So, the more we replace some obsolete and outdated equipment, the more we improve the supply of electricity,” the minister maintained.