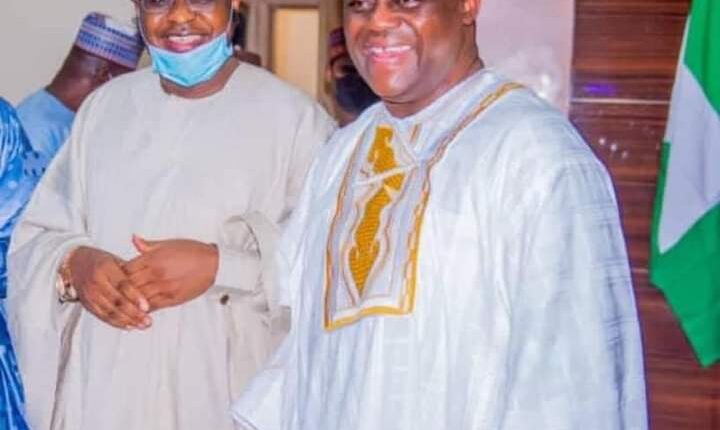 “The stubborn listens to nobody’s advice and becomes a victim of his own delusion.”
— Aesop

He came out smoking. He was fire-cracking. He flailed feebly and floutingly. He gamboled ghoulishly and ghastly. It was a berserk noctambulism. Dipped in the natatorium of perplexity resulting from his own peccadilloes, he desperately swam like a cat fish in a poisoned pond. He was like a bull in the china shop. Like a rattled snake, he seamlessly and carelessly sprayed poisonous inanities to justify his foolishness and putrid public shenanigans. He acted like a desperate goat cornered. He painted his charlatanism in quivering colours and deodorized his boondoggles.

He showed that he is a dangerous element about whom we should all be careful for the sanity of our polity. He concretized himself as a pariah from whom t’erú t’omo should stay away. Except for those who would be interested in feeding this onomatopoeic dog in order to send him on odious errands, he is no use to the polity. He demonstrated outright lack of decency and courtesy for himself and whatever he had ever stood for, if anything at all. He showcased himself as selfish, self- centered, egoistic and homicidally egocentric. He made it clear that he did not care a bit about anything as long as his childish, self-destructive desires are gratified at all costs and by all means.

In his hurried response, Femi did not care to remind us of where and when Pantami apologized for his acts of terrorism upon which his (Femi’s) faith mandated forgiveness. He did not affirm for the readers that “civilization” meant ethnic cleansing, murder of vulnerable men, young and old, raping of our mothers, daughters, sisters and aunts, the destruction of our farms, burning of our villages and towns and appropriating of our ancestral lands.

Yes, he is brilliant. But he is not smarter than everyone. Yet in his own foolishness, he thinks he is. Otherwise, he would not have self-immolated in his response to those who cared enough to call his attention to his ignominious outing with his terrorist “brother and friend” Sheikh Ali Ibrahim Pantami. He should have been more sober. He should have tarried a little to think about the situation before his vituperation.

Femi Fani-Kayode is someone whom many have defended, including myself, despite his obvious inconsistencies. In his Instagram rant, he showed no iota of love for that crowd for being miffed at his indiscretion. He showed them no scintilla of respect as he descended into opprobrious wishes for all of them. Femi refused to recognize that respect is reciprocal and that he owed those who were giving him benefits of the doubt some modicum of reciprocal benefits of the doubt. He clearly showed that he was irresponsible by insisting he owed them no explanation.

This misguided and foolish reaction would come to haunt him in due course because he was acting like the devil as he perverted the meaning of the word “civilization.” I never knew that “civilization” meant pandering to murderers and terrorists. His depth-less
simplification of the camaraderie in the kleptomaniac crowd as a justification for his own shenanigans is ghastly. There is no doubt that Femi knows that he has handed the ball in the box, he was just unable to extricate himself from the web of his greed.

Femi spoke of his courage. Everyone knows Femi is courageous, but he should beware of the courage of the hungry rat who chased after the meat on tàkúté and ended up being killed. He then wrote inter alia:

The tragedy of the situation is that already, most Nigerians considered him an intellectual and political prostitute. He is deemed to have no principle beyond making wealth by milking the system. Nigerians belief that he would lick any stinking ass, bite the base of any boot, speck any malodorous cheek and whiff any effluvial sweat to belong to any group in order to have the opportunity. To Nigerians, he has no integrity. Neither does he possess self-dignity. He is seen as a rabid dog that is perpetually, desperately ravenous. He is regarded by Nigerians as an audacious and flagrant canary that would sing at the sight of any fetid crumb

Many who had nursed any hope of rebirth for the Fani-Kayode family name have become forlorn. They have come to appreciate that an apple falls not too far away from the tree. They have realised that genes are veritably strong and could not be easily purged from a descendant. The memories of his father’s atrocities in Western Region is still fresh. Many of his father’s victims, many of whom are far older than Femi are still alive to tell the harrowing stories of his father’s despicable politics.

In 1964, Chief S. L. Akintola, was returning from Ekiti and passed through Ilesa. His convoy passed in front of Ilesa Grammar School, Ilesa, and it was an Inter House Sports day. The students who saw his convoy began to hail him “SLA” “SLA” “SLA”. The convoy stopped thinking the students were shouting “Esè Olè” which literally meant “Footprints of a thief.” Remilekun Fani-Kayode, Femi’s father, led the assault on innocent students as they were chased with the notorious UTC machetes, wounding several of them while he climbed the school fence giving directives to his thugs.

Imagine a Deputy Premier of the whole Western Region climbing the school fence to unleash thugs on school children! What could they have done to warrant such heartlessness and recklessness? What lack of etiquette could be so diminishing? What a flagrant and blatant exudation of lack of restraint expected of such a high office as that of Deputy Premier? What a miasmic manifestation of indiscipline, indiscretion, indecency as well as uncouthness!

While the sordid incident was unraveling, it was reported that one of the students, Olaseni Adeboye, who represented the school in Javelin throwing, was going to throw his javelin to hit RFK. It took the intervention of the science master and Javelin coach, Mr “Segmo”, a South African, who forcefully pulled Olaseni’s arm back and ended up dislocating the said arm. Otherwise RFK would have been a dead man in Ilésa.

This was a reportedly refined gentleman by all standards. Having finished at King’s College, Lagos, Remilekun Fani-Kayode went to Downing College at the University of Cambridge, in 1941. He then did the British Bar examinations and came top in his year for the whole of the British Commonwealth. He was called to The British Bar at the Middle Temple in 1945, and went on to be appointed Queens Counsel in 1960 (he was the third and youngest Nigerian ever to be made Q.C). Later, he was made a Senior Advocate of Nigeria in 1977 (he was the third Nigerian to be made a SAN). In spite of all this, Femi’s father, RFK, still turned out to be a tout and a thug! Another example of the irrelevance of chains of white man’s degree to having a real education and making a solid character.

So, Femi would not be doing anything out of his genetic character if he did not care what anyone thinks about him as a practising political and intellectual prostitute. Many Yoruba were worried when he surfaced in Sunday (Ìgbòho Òòsà) Adeyemo’s house in Ibadan. The History of what happened since then are yet to be told, some believe. Femi should know that no one needs his apology because it would have meant nothing to nobody. The Bologna Chapter of Partito Socialista Italiano (PSI) or Italian Socialist Party had a motto: “He who betrayed once, will do it again.”

Femi had contemptuously asked in his acerbic response: “Are you still foaming at the mouth because I shook hands with Isa Pantami?” Well, I call his attention to the that I am glad to foam in the mouth about his treacherous trajectory, if that would cincture our polity from the dirty tricks of a dubious political wayfarer and intellectual prostitute like him. Hopefully, he would give me another opportunity to “foam” in the mouth to be able to call him out on his perfidious pandering to the terrorists threatening our existential survival, after this.

“In the long history of the world, only a few generations have been granted the role of defending freedom in its hour of maximum danger. I do not shrink from this responsibility – I welcome it.
-John F. Kennedy