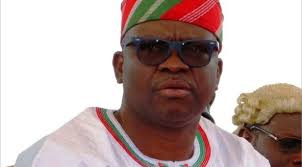 Share
After several weeks of face-off over who controls the Peoples Democratic Party (PDP) Southwest region, Ekiti State former Governor, Ayodele Fayose, has dropped his leadership ambition and submitted that the Oyo state governor, Seyi Makinde, is leader of the party within the region in the country.
Fayose, who pledged his loyalty to Makinde leadership at the congress, said that what appeared to be a face-off was a clash of ideas and all the arguments was to ensure that PDP has aformidable leadership structure that can rest power from the All Progressive Congress (APC) in 2023.
While openly declaring that Makinde remain his leader, the former governor, on Monday during the zone’s congress, noted that he is the only governor from the party in Southwest and therefore deserved to be respected by members of the PDP in the region.
The ex-governor said, ” to the surprise everybody who think am fighting Seyi Makinde over leadership tussle, I hereby say that, he, Seyi Makinde is my leader”
Addressing party members in Oshogbo, Osun state, venue of the congress, assured members of the party that the outcome of the congress would be accepted by him.
In his response, Makinde commended Fayose for his doggedness and steadfast towards the development of the party, stating that his actions were needed to strengthen PDP towards reclaiming the leadership of the country during next general elections.
The governor, therefore, said that the aim of the party was to defeat the APC in Nigeria and ensure that the party goes into extinction.
Meanwhile, the Chairman of the congress panel, Samuel Ortom, Benue state governor, represented by his deputy, Benson Abounu said that everyone should work for the progress of the party and that the election of the congress would be transparent.