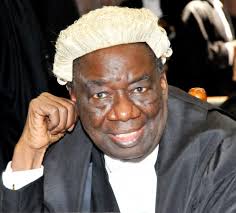 Famous ex-Attorney-General and Minister of Justice, Richard Akinjide, has passed on at 88 years, barely three days after Abba Kyari, the Chief of Staff to President Muhammadu Buhari, who died from coronavirus complications.

Akinjide, who served under the administration of late Prime Minister, Tafawa Balewa, and became famous for ensuring the country temporarily reverses public executions of armed robbers, died on Monday evening.

The deceased, who was appointed minister of education, ensured that the country did away with the decree barring Nigerians that had gone to exile from returning home.

Before his death, the famous lawyer, in an interview with newsmen claimed that the Buhari-led administration cannot address Nigeria’s challenges considering his background as a military officer.

“First of all, I don’t believe that a man who is a soldier all his life should go and put down the military uniform and take on the civilian dress and become a politician. That is total nonsense. An army man is not fit to be a politician because his mentality is that of an army.

“I don’t know of any military man who has successfully become a good politician. If anybody thinks that is possible, it is rubbish, it is not possible. If you are an army man, be an army man, and if you want to be a politician, be a politician, a businessman should face his business, you have no business being in politics”, Akinjide added.