Family of one of late apex leader of Lagos State chapter of All Progressive Congress (APC) apex leaders, Ganiu Badmus, would be holding eight days Fidau prayer on Friday, 3rd of July, 2020 for the deceased who passed on a week ago after a brief illness.

Badmus, who was Mandate chairman, a group within APC that was recently dissolved by the Governor Advisory Council (GAC), passed on at age 71 and was laid to rest at the Okesuna burial ground, Lagos Island, last Friday.

In a tribute by the late politician’s family obtained by The Guild on Thursday, the eight-day prayer will hold at the deceased residence in Ketu area of the state.

“With absolute submission to the will of Allah, we announce the death of our father and grandfather Alhaji Chief Abdul Ganiyu Ebudola Badmus

The late Badmus is survived by wives, children, and grandchildren, brothers, and sisters. 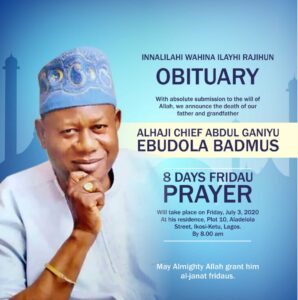