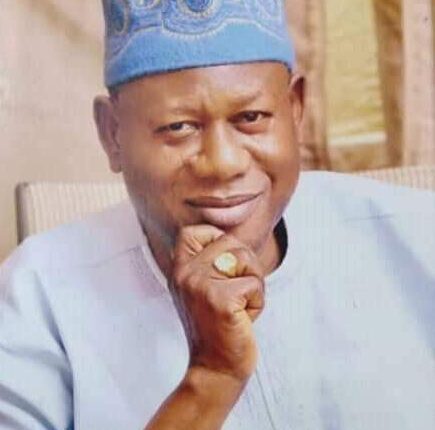 Share
In accordance with Islamic rites, All Progressives Congress (APC), Lagos State apex leader, Ganiyu Badmus, has been laid to rest after his death was confirmed by medical experts.
Badmus, who was Mandate chairman, a group within APC that was dissolved by the Governor Advisory Council (GAC), passed on at age 71 and has been laid to rest at the Okesuna burial ground, Lagos Island.

Before his death at the early hours on Friday, the former APC leader was one of the trusted allies of the party’s National leader, Asiwaju Bola Tinubu and minister of interior, Rauf Aregbesola.

The deceased was laid to rest at about 12 pm amid eulogies from political associates, friends and beneficiaries of his generosity after clerics clocluded the Islamic rites on the former apex leader in Oshodi-Isola Local Government.
Eulogising the deceased, Secretary to Oshodi/Isolo Local Government, Taoheed Oladipupo, described the deceased as a man that stood for the welfare of all in the party and ensure that the progressives ideology became entrenched in the country especially in Lagos.

“Verily we belong to God, and verily to Him do we return, we have lost a great leader, Alhaji Ganiyu Abayomi Ebudola Badmus who died early today after a brief illness,” he said.

“May Allah forgive his sins, overlook his shortcomings, and grant him the highest rank in Paradise. May He give his families, the Local Government, the Lagos State Government, and his Political Associates the fortitude to bear the irreplaceable loss”, he added.