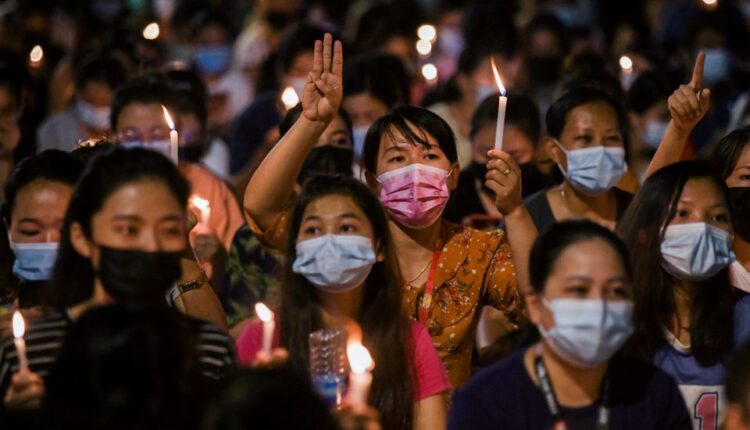 The families of dozens of people killed in demonstrations against military rule in Myanmar held funerals for their loved ones on Tuesday as more protesters defied the security forces in renewed march.

As gathered, security forces shot dead at least 20 people on Monday after 74 were killed a day earlier, including many in a suburb of Yangon where Chinese-financed factories were torched.

It was also learnt that the political and economic crisis over the February 1 ouster of the elected government led by Aung San Suu Kyi could soon mean hunger for the poor who are facing rising food and fuel prices across the country.

However, it was all tears and eulogies on Tuesday at a crematorium in Yangon where 31 funerals were held in honours of those killed across the country in the ongoing nationwide demonstrations.

Hundreds of young mourners spilt out onto the street at the funeral of medical student Khant Nyar Hein who was killed in Yangon on Sunday, the bloodiest day of the protests, chanting “our revolution must prevail.”

“Let them kill me right now, let them kill me instead of my son because I can’t take it anymore,” the student’s mother was seen saying in a video clip posted on social media.

Some families told media that the security forces had seized the bodies of loved ones but they would still hold a funeral.

At least 184 people have been killed by the security forces in the weeks of protests, according to advocacy group the Assistance Association for Political Prisoners (AAPP), with the toll rising on Tuesday as one protester was shot dead in the central town of Kawlin, a resident there said.

People held up pictures of Suu Kyi and called for an end to the repression during a small protest in the southern town of Dawei on Tuesday with no report of violence.

U.N. Secretary-General, Antonio Guterres, disclosed that he disturbed by the escalating violence at the hands of the military and called on the international community to help end the repression.

A junta spokesman did not answer telephone calls to seek comment and Reuters could not independently confirm all the casualties.