Explosions take over communities after high-tension tower collapse in Lagos 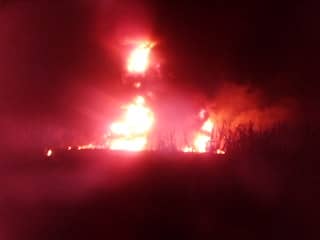 Residents of Peace Estate in Baruwa and other adjourning communities in Ipaja, Alimosho Local Government, Lagos State, were currently in a panic mood following a pipeline explosion within the axis.

The explosion was said to have occurred on the eve of the Christmas after a high-tension tower collapsed, resulting to a spark from the cable transmitting power supply from Egbin station in Ikorodu to other parts of the state around the pipeline.

As gathered, the pipeline owned by the Nigerian National Petroleum Corporation (NNPC) was said to have been leaking with the Petrol Motor Spirit (PMS) content flowing into some parts of the community.

It was learnt that several minutes after the pipeline begun to leak, the electrical transmission tower collapsed and destroyed vehicles as well as other property worth millions of Naira in the state.

The sparks that occurred after electrical facility collapsed was said to have gotten to the location where the pipeline was spilling its content, therefore, triggering the explosion that threw the entire axis into panic. 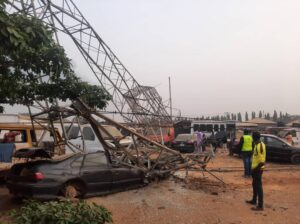 The fears of the residents were that the damaged electrical facility with high voltage cable drawn from Egbin hydropower station in Ikorodu axis of Lagos and the pipeline that exploded poses a threat to their lives and other property within the radius of the affected tower and leaking pipeline.

As gathered, the electrical facility collapsed and destroyed vehicles and other property after some parts of the high-tension tower give way and fell on the affected property.

It was learnt that vehicles parked under the tower and a few meters away were not spared destruction as well as buildings and shanties sited around the facility.

Although no casualties have been reported but the explosion and the collapsed facility have been confirmed by the Southwest Coordinator of the NEMA, Ibrahim Farinloye, and the Director, Lagos State Fire and Rescue Service, Margaret Adeseye, on Friday.

Speaking on the explosion, Adeseye said that firefighters were currently engaging an intense the explosion from a System 2B Pipeline leakage in Peace Estate.

According to her, the fire call which was reported at 00:31 hours Christmas Eve is presently confined to be burning at the source of leakage of the pipeline belonging to the NNPC.

“The agency is assuring the residents of the area that the strategy being deployed to control the burning rage with copious water and chemical foam compound would not allow it to affect any nearby property or life which are over 200 metres away.

“Consequently, members of the public are advised to go about their legitimate activities without any fear as it will take a while for the remains of the petroleum products to dry up in the pipeline.

“Although the cause of the leakage is yet to be ascertained, Officials of Lagos State Fire and Rescue Service remain on top of the situation and will provide necessary updates as situation demands”, she added. 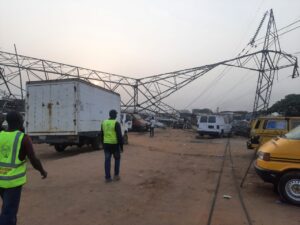 On the collapsed electric facility, Farinloye, meanwhile, appealed to residents and motorists to observe serious safety precautions due to the collapse of high tension poles that emanated from the Egbin Hydropower station.

He disclosed that the facility was used for the transmission of power supply from Egbin Power Plant, Ikorodu to other parts of the state.

“Residents of Igando, Idimu Axis are strongly advised to observe serious safety precautions due to the collapse of high tension poles that emanated from Egbin Hydropower station.

“The line came in from Ikorodu across Ikeja and other areas. The fire service has been mobilised to provide eagle in case of a fire outbreak.

“Power Service agencies especially Ikeja Electric Distribution Company and others are trying to isolate the 330 Line for safety reasons”, the NEMA officer added.