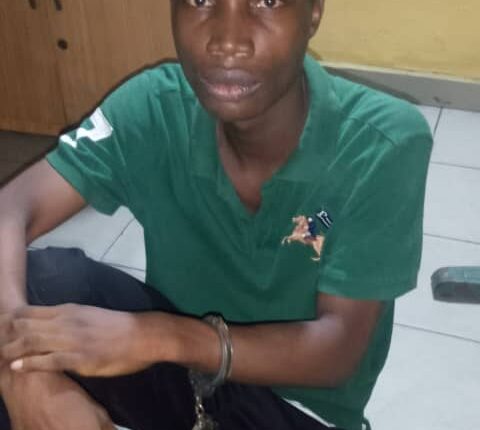 When disappearance news of Vanguard’s late reporter, Tordue Salem, reached public domain days after his absence was noticed at work and other circles, conclusion from both family, friends and colleagues were that the journalist must have been kidnapped by unknown gunmen and they never suspected otherwise.

Although, few friends suspected that the young man may have been arrested by police due to nature of his profession, but the guess of those who believed Salem was kidnapped was justified when wife of the late reporter contacted police to inform the law enforcement agency of strange calls she received on her phone with information on whereabouts of her missing husband.

At first, the wife believed the callers information but later became uncomfortable when she insisted that she must speak to her husband if she would be cooperating with them and give whatever they demand from the family.

Until police, through operatives of Intelligence Team (IRT), unraveled one Prince Enyenihi as the brain behind the calls and text messages late Salem’s wife had been receiving, the woman was already soliciting from friends and relatives part of N100 million which the fake kidnapper asked the family to pay into a Zenith bank account that was supplied through SMS.

The Guild learnt that a team from the IRT arrested Enyenihi in Port Harcourt, Rivers State, few days after investigations commenced on calls and messages wife of the then missing journalist reported to the team and that the 25-year-old man confessed to be the criminal behind the fake kidnaping of Salem.

Sources from police in Port Harcourt told The Guild that the suspect who hailed from Akwa Ibom knew nothing about Salem’s whereabouts but was just trying to take advantage of the situation in milking the family.

They disclosed that Enyenihi’s plan was not only to exploit the family but also to implicate the owner of Zenith bank’s account and telephone numbers that was sent to Salem’s wife for payment of N100 million demanded as ransom from the family.

One of the sources hinted that the suspect confessed to had picked Vanguard’s late reporter’s wife number on Facebook where the woman had posted message of her missing husband and soliciting for information on Salem’s whereabouts.

She said that the young man put calls through to the bereaved woman with hidden contact, pretending to be Salem’s friend and playing on the wife’s situation so as to tap information that could be used in making money on the missing journalist.

She explained that the wife believed the caller at first but detected that something were not right when the person presented to her on phone as her husband could not answer questions relating to name of their only daughter and date of birth of last child of the family.

“First time Enyenihi called the woman with hidden number on 26th of October, he pretended to be Salem’s friend and asked if the journalist have been found but the wife queried why he had called with unknown number if truly he was a friend to her husband as claimed.

“Few hours later, another hidden number called to inform the woman that Salem was in their custody and he was in Port Harcourt. But the woman demanded to speak to her husband and it was a lot of trouble before a man was presented to the woman on phone as her husband.

“This man was not able to answer Salem’s wife questions when she asked for the name of their only daughter and date of birth of last child of the family. The next thing was that they collect the phone from the other man and started shouting on her that she was asking too much question.

“By 9:30 pm, the woman received a message where the kidnapper demanded ransom of N100 million that is to be paid within time frame of seven days or else Salem would be killed. The kidnappers supplied a Zenith bank account number and telephone number belonging to a woman that resides in Port Harcourt,” the source said.

Another source from Rivers State Police Command confided in the Guild on how IRT team went after the telephone and account numbers that was sent to late Salem’s wife and that the team discovered both telephone and account information to be that of a woman he claimed to be innocent to the fake kidnapper’s plan.

He told The Guild that the team picked up the woman in Port Harcourt and through her phone the IRT team members were able to discover another number that had been calling both the innocent woman and late Salem’s wife with unknown number simultaneously.

The source said that through surveillance, the team was able to pick Enyenihi at his resident and he was discovered to be sharing same premises with the woman whose account and telephone numbers were sent to wife of the deceased journalists as the receiving account for the N100 million ransom.

“IRT team arrested Enyenihi after several efforts and the young man confessed to be the only brain behind the telephone calls and messages sent to Salem’s wife and he was only trying to take advantage of the situation.

“Enyenihi knew that he can never lay his hands on the N100 million but confessed to police team that he actually supplied his neighbour’s telephone number and account information just to put her in trouble because the woman is too full of herself, proud and stubborn.

“The police will prosecute Enyenihi for his actions and letting the deceased journalist wife and other family members for going through such traumatic experience,” he said.

When The Guild contacted Rivers State Police Command to know next line of action on the young man and if investigations would continue, there was no personnel to give concrete response on it and all other efforts to speak with police headquarters on the matter also proved abortive.