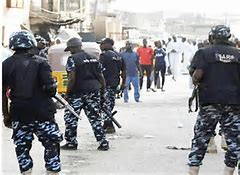 Panics have continued renting Mile 12 community atmosphere after two rival-groups of cultists clashed on Monday evening, leaving one of the groups’ member dead while the community members were scampering for safety.

It was gathered that the same group that lost a member on Monday, also lose one of its top man during a fight last week and that the new clash was in retaliation of the the senior member of the group that was killed by the other faction.

The Guild learnt that aside from the young man that was reportedly killed on Monday, three other members from both groups were comfirmed to also have died during clash a week ago, an indication that cultists fights have been ongoing among factional cultist members in the community for couple of weeks and that killings had become regular routine in the area.

Due to the ongoing fights between the groups, residents within the community have began vacating their homes and searching for another place of abode elsewhere as they feel unsafe with persistent fights among cultists.

One of the residents, who spoke with The Guild under anonymous condition decried the state of insecurity which residents and businesses in the busy market community were forced to live in and said that only members of the warring groups could tell reason behind their clashes, adding that the community had lost many young men to death due to cult group battles.

In response to the situation, the State Police Command spokesperson, DSP Bala Elkana, who spoke to The Guild on Tuesday, confirmed the killing of one person at the Maro junction area of Mile 12 and disclosed that it had been as a result of reprisal attack clashes by carried out by Aiye cult members on their rival Eiye cult group.

Elkana revealed that the situation could have been worse but was quickly doused by prescence of officers of the Special Task Force on Criminal Miscreants, which he said had been deployed in response to intelligence received by the state command on possible plans of attacks being carried out in the area.

He hinted that several of the top group members had been apprehended, with over 600 being indicted on various charges ranging from murder to illegal arms possession and other such crimes, adding that such was result of concerted efforts by the state police command to put a decisive end to criminality in Lagos State.

The command spokesperson explained that the command had carried out a state-wide operation targetting known criminal hot-beds in the state including Ikorodu, Oworonshoki, Bariga and Mile 12 amongst others, saying that the operation had greatly lessened the hold of criminals in the target areas.

Elkana said that the state command had uncovered that all the suspected miscreants and cult members where children of community members, living with their families in the neigbourhood, and that they were all known faces, adding that it had, as a result, become necessary to hold stakeholders meeting to sensitize community members on why they needed to withdraw support from all forms of criminal behaviour.

“These boys live with their parents in the community, people know them. We are, therefore, going to hold a stakeholders meeting to sensitize these people. They should realise that they need to work with the Police to stop this menace, they should stop condoning the activities of these boys , in order to ensure safety of their communities,”

“We have held stakeholders meetings before in several communities which yielded great results. It has become imperative to hold one in Mile 12”, he said.

Elkana assured the public of the Lagos State Police Command’s commitment to securing the lives and property of Lagosians and said that officers and men of the command were on their toes to make sure criminality was reduced to barest minimum in the state.