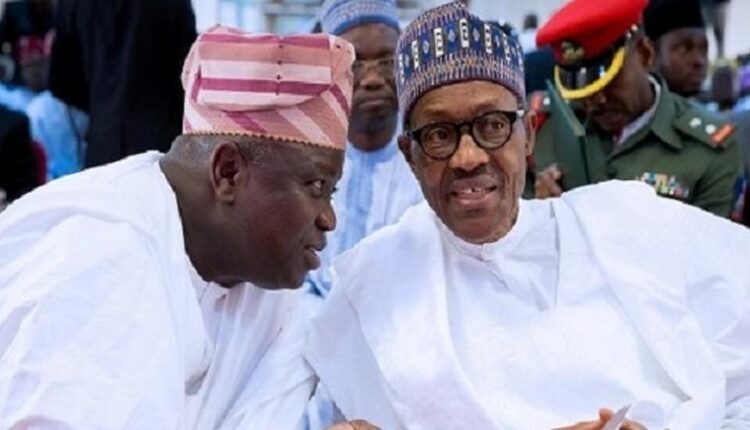 Body language of Presidency towards Lagos State former Governor, Akinwunmi Ambode, particularly after his appointment as All Progressives Congress (APC) Contact and Strategy officer was an indication that the apex government still have the former governor at heart.

Should the former governor be considered for a ministerial post as been speculated by strong political quarters from the APC that his name has been penned down by President Muhammadu Buhari, it means Ambode has been rewarded for been rejected by his people in Lagos who denied him of second term in office in 2019.

From a new revelation emanating from strong setting, both in Aso Rock and Ambode inner caucus, it was gathered that discussions were already ongoing on whether or not the one-time governor should be appointed as a minister, with a strong portfolio, and that if things go well the man might be announced by presidency soonest.

Through strong sources, The Guild learnt that preparations have been in top gear even from Ambode to take up the new job since he was no longer relevant and recognised in Lagos and at state’s party level.

They told The Guild learnt that the former governor would be getting the appointment as a reward from President Muhammadu Buhari, which signal that Lagos APC would not have any influence on Ambode’s new role to serve inside as one of the president’s cabinet members.

The sources claimed that Ambode’s consideration for any ministerial post has nothing to do with Lagos where he was denied second term and other perks of office occasioned by the recent law which slashed ex-governors pensions, among others.

Aside from perks of office, the governor has also been absent in Lagos APC decision making organ, Governor’s Advisory Council (GAC) and other meetings involving political heavyweights in the state, which had rendered Ambode into political oblivion in his home state.

It was gathered that those who lobbied the positions for the former governor were strong cabals in the presidency and that party leaders from Lagos may not be able to influence it otherwise as it was already a done deal said to have been endorsed and awaiting only announcement from the president.

One of the source from Ambode’s camp who spoke with The Guild on condition of anonymity because of the matter’s sensitive nature, said that the appointment had been perfected at the centre and that it was part of the deal that the former governor make it as secretive as possible till it was announced.

She added that followed his appointment into the 61-member of APC Contact and Strategy Committee, and his effective contributions to the committee’s job, his progress report was presented to the presidency where the journey started before he was finally considered and penciled down for the job.

“As I speak with you, his name has been confirmed on the list and every necessary process has been perfected. We are only awaiting the announcement that will follow major cabinet reshuffling from the president. So, the appointment will be another consolation for the governor after he was unjustly denied second term in Lagos State.

“The appoint will bring him back to political relevance ahead of 2023 general elections. Also, the appointment will better reposition him for other higher opportunities after the 2023 elections. Right now, I can confirm to you that the camp is happy and we are all awaiting the announcement,” the source said.

Another source from Aso Rock said that the decision to appoint Ambode has been made for a long time but the timing has not been right and that with next cabinet reshuffling, his name would be announced among new cabinet members to work with Buhari.

He said, “Ambode has been penciled down for ministerial position for quite a while now but the recent happenings had been affecting his appointment. However, his name will be announced among list of next ministerial appointments. It is a done deal already because the position was lobbied for him by strong members in the presidency.”

Although, the former governor has denied the speculations and distanced himself from any purported ministerial appointment, the source claimed that Ambode silence was needed to ensure unnecessary distraction was kept away and the move remain hidden as much as possible.

It would be recalled that after his last appointment into APC Contact and Strategy Committee in May, Ambode had said his selection was a call to serve the country. He said that serving the country was more important to him and that he was ready always to contribute his experience over the years to the development of Nigeria and APC.

The former governor was selected into the committee alongside his successor, Babajide Sanwo-Olu, Kogi State Governor, Yahaya Bello, his Borno state counterpart, Babagana Zulum, Deputy Senate President, Ovie Omo-Agege, and two former Speakers of the House of Representatives, Dimeji Bankole, and Yakubu Dogara as well as others.

The former governor’s appointment came barely one year and nine months after leaving office and distancing himself from political discussion within the party and across the country. He said: “Along with other notable and distinguished colleagues, I was today selected by our party, the All Progressives Congress, to be a member of the Contact and Strategy Committee. This is a call to serve the Party and more importantly, our nation”.