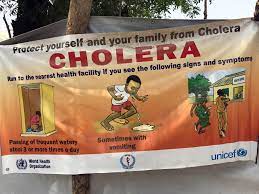 No fewer than seven additional persons have been confirmed dead after contracting cholera, increasing the number of casualties recorded across the Enugu State since its outbreak to 14 and dozens of others hospitalized.

It was learnt that the seven additional persons were among the 19 people that contracted the sickness and that the others were currently battling for survival.

The state’s Commissioner for Health, Dr. Ikechukwu Obi, who confirmed the death toll on Tuesday in a statement made available to newsmen, hinted that the ministry’s rapid response team had investigated the ailment and discovered that the patients had sudden onset of the passage of loose stool and vomiting.

According to him, the state government would continuously make plans to forestall further spread of the disease by carrying out more sensitization on safety and hygienic practices across Enugu.

The ministry’s head of public health and disease control, Boniface Okoro, added that the death were recorded during the last five days of the outbreak.

Okoro added that a larger percentage of those already infected have been admitted at the Teaching University Hospital of Parklane, Enugu State for adequate medical treatment.

He explained that seven persons died during the weekend but yesterday, the state recorded seven additional deaths, saying the death increased the death toll 14.