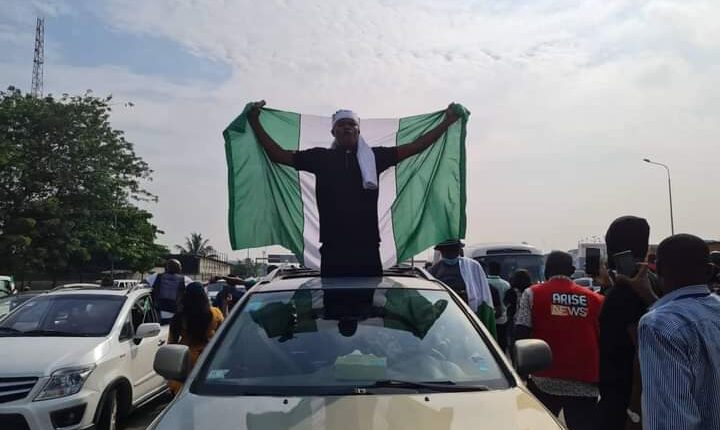 In spite of the ban placed on protest by Nigerian Police, hundreds of youths returned to different locations across the country, embarking on emonstration to mark the first anniversary of military officers alleged killing of peaceful protesters at Lekki tollgate and other brutalities perpetrated by security agencies on innocent citizens in the country.

The youths gathered at different locations across the country to mourn their departed colleagues and consoled those that had suffered separate forms of body injuries inflicted on them by men of the defunct Special Anti-Robbery Squad (SARS) and other law enforcement officers across the country.

Defying all threats made by the law enforcement agencies, the demonstrators expressed their displeasure over the strategies adopted by security agencies which they described as unprofessional and that it do not conform to global best standards.

And in order to ensure that they were never hindered by the law enforcement agencies, the youths adopted different strategies to beat traps already set by the Nigerian Police and other security agencies deployed to prevent the exercise from holding.

The procession started in Lagos, the commercial capital city, with the demonstrators adopting a drive-through procession at the Lekki toll gate, blaring horns of their vehicles as well as waving the Nigerian flag, demanding justice for their departed colleagues.

As gathered, the strategy was adopted after Policemen from the Lagos Command took over the Lekki tollgate and arrested anyone found to have shown solidarity with the protesters as well as harassed and arrested some journalists for not properly displaying their identity cards.

The youths were joined by some of the celebrities including Rapper and actor, Folarin Falana, popularly called Falz, and Comedian Debo Adebayo, popularly addressed as Mr. Macaroni, Charles Oputa, also known as Charlie Boy, and many others, joined the car procession at Lekki tollgate.

All the demonstrators that turned up at the tollgate with their cars were seen waving Nigerian flags from inside the vehicles and honking the horns while singing solidarity songs.

But as they moved around the scene, they were later dispersed by the law enforcement agency after the premises became rowdy with some of the protesters disembarking from their vehicles to further express their displeasure over governance in the country.

The police fired teargas canisters to disperse youth and arrested more than five protesters including a youth that was armed with a machete and other harmful objects.

Around 8:40 a.m., the protesters in various vehicles flooded the Lekki tollgate despite the heavy police presence holding on to the Nigerian flag while chanting #EndSARS and honking their horns.

Speaking on the reason for their actions against the protesters, the Commissioner of Police, Hakeem Odumosu, who was also at the scene, said that activities of the youth were already causing public discomfort and could not be allowed to linger further.

Odumosu said he ordered the firing of teargas to avoid a breakdown of law and order because the protesters went against the promise earlier made that the procession would start by 8 a.m. and end by 10 a.m.

“The protest was between 8 a.m. and 10 a.m., anything, after 10 am, is a nuisance. I discussed with them and they said they will end the protest by 10 o’clock. Other people doing it now just causing a nuisance. Some with machete, hammer, are they protesters or miscreants?”.

He, meanwhile, described those attacked at the Lekki tollgate as hoodlums and not the EndSARS protesters that had earlier converged at the facility to express their displeasure.

Also in Kwara, Enugu, and Osun States, the protesters were dispersed by law enforcement officers, claiming that they were violating directives issued barely 24 hours earlier.

In Kwara, the roving police patrol dispersed the EndSARS protesters that had gathered in front of MAMTESS Supermarket along Taiwo Isale, Ilorin, the state capital,

One of the organisers, simply identified as Jamiu told newsmen that they had hardly taken off from Taiwo Isale, when the fully armed anti-riot police officers disperse them.

In Enugu, the law enforcement officers ensured that no possession took place after they occupied Michael Okpara Square, the venue chosen by the demonstrators in the state.

It was learnt that the gate to the venue of the planned procession was locked and journalists, who visited the scene to gather news for their various mediums, were restricted from the venue by security personnel.

The rally commenced at the Unity Fountain where the youths, led by social activist, Omoyele Sowore, marched across some of the major streets in the nation’s capital, to demand the resignation of President Muhammadu Buhari for going against promises made while assuming power.

From the Unity Fountain, the youths marched towards the National Assembly but they were intercepted by a team of security operatives.

They comprise operatives of the Nigerian Police Force, the Nigerian Security and Civil Defence Corps (NSCDC), the Department of State Service (DSS), and other security agencies.

The security operatives mounted a barricade to prevent the youths from proceeding with their rally, despite the action of the security team, the situation was peaceful as the two sides stood face-to-face, with the youths chanting songs of solidarity.

Sowore, while addressing journalists during the rally, said the government has not shown any remorse, one year after the protests, and rather, the government continued to suppress the citizens, particularly barring freedom of expression.

He said justice was yet to be served on security operatives involved in the shooting at the Lekki tollgate in Lagos on October 20, 2021.

Also, in Edo State, youths gathered around the national museum in Benin City, the Edo State capital, in commemoration of the one-year anniversary of the #EndSARS protest and they demanded that the recommendations of the Edo Judicial Panel of Inquiry on police brutality and related issues be implemented.

Some of the victims of police brutality were also at the memorial including those allegedly shot during the protest last year.

One of the victims, Steven Ohimai said his leg was amputated following the shooting incident while the other, Miracle Ailenokhuoria said he was shot in the hip and is still undergoing treatment.

Processions were also held in Ibadan, the Oyo State capital, with youths carrying placards gathering at the entrance of the government secretariat in Agodi.

They marched from Iwo road interchange and proceeded through the main road to Idi Ape, Gate, and reached the government secretariat.

Security operatives monitored the protesters to prevent the breakdown of law and order and miscreants from taking over the procession.