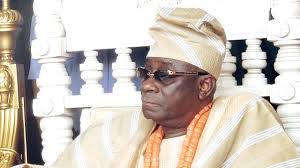 The Oba of Lagos, Rilwan Akiolu, has disclosed that no fewer than $2 million and N17 million were carted away by hoodlums who stormed and ransacked his place during the last year’s protest against police brutality.

The first-class monarch made the disclosure on Wednesday during the commissioning of the Glover Hall Memorial in Lagos. The remodeled hall was aimed at boosting activities in the entertainment and creative sector disrupted by coronavirus pandemic.

It would be recalled that the traditional ruler’s place in Iga Idungaran, in Lagos Island axis of the state was looted and vandalized by hoodlums after the protest took a violent dimension last October.

The rampaging youths had during the invasion took the Oba’s staff of office, which is the symbol of authority of the monarch, after Akinolu, alongside other royal family members were evacuated from the palace.

Recounting his loss at the event on Wednesday, the monarch admitted that though he lost personal belongings during the attack, he had decided to put the incident behind and embrace all and sundry.

“I will support anything that will move Lagos forward. I have appealed to the Federal Government to assist Lagos with what we have suffered. We host many people here, not Lagosians alone. The incident that happened here from October 20 to 23rd is so saddening.

“The destruction we suffered in Lagos is so enormous than in any other part of the country. Many buildings were burnt, including vehicles used to generate income. I can now say publicly that they stole away from my palace $2 million and N17 million.

“Those who committed the offence would not have done that if they know the implication. But as a father, I won’t place any curse on them,” the septuagenarian said.