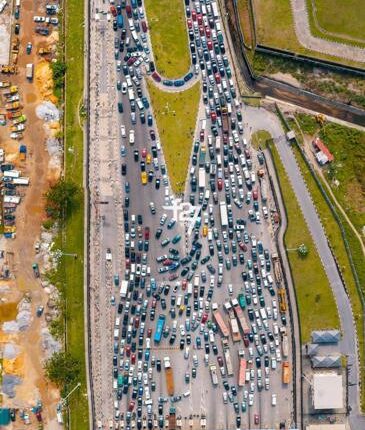 Despite disbandment of the Special Anti-Robbery Squad (SARS) by Inspector-General of Police (IGP), Mohammed Adamu, Nigerians on Monday return to the streets, mounting roadblocks on roads and laid siege at public places in Lagos State to demand President Muhammadu Buhari pronouncement on the law enforcement agency.

The development by the protesters had led to an early morning gridlock on bridges and major roads including Lekki-Epe expressway, forcing many commuters and motorists to spend several man-hours on the road.

The youths also blocked entrances of the Murtala Muhammed Airport Access Plaza and National Stadium Surulere, Lagos-Ibadan expressway displaying placards with various inscriptions in a bid to ensure the President address the country on the raging issues.

It was gathered that motorists that could not withstand the stress were seen plying alternative routes to avoid been held back in traffic as a result of the roadblocks mounted by the protesters.

According to the protesters, the SARS officers should be psychologically evaluated and re-trained before they are redeployed and absorbed into other formations of the Nigerian Police.

They also demanded justice for all deceased victims of police brutality, and appropriate compensation for their families as well as release all protesters arrested over the EndSARS march across the country.

Aside from that, the protesters suggested an increase in salaries of police officers as well as the establishment of an independent body to oversee the investigation and prosecution of all reports of police misconduct within 10 days.