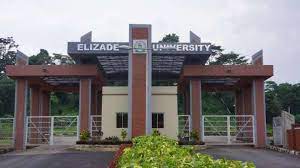 The management of the Elizade University has cleared the air on the circumstances surrounding the death of a 300-level student, Temitayo Owodolu, whose parents were demanding N1 billion damages over her demise.

It said that the deceased nursing student never died in its medical centre as a result of the negligence of health workers at the institution’s facility.

Earlier reported that Temitayo’s parents, Gbenga Owodolu and his wife, Oluwabukola Owodolu have demanded N1billion damages from Elizade University over the death of their child.

The couple in a letter written through their lawyer, Femi Emmanuel Emodamori, said their daughter, a 300-level nursing student, died as a result of the negligence of health workers at the institution’s facility.

Explaining what transpired before the lady drew her last breath, the institution through a statement signed by the registrar, Omololu Adegbenro, and made available to newsmen yesterday.

Ther statement reads: “On Tuesday, November 16, 2021, the entire community of Elizade University was thrown into mourning with the tragic loss, to the cold hands of death, of our beloved student, Miss Temitayo Owodolu.

“Temitayo was a 300 level student of the University. She sadly passed away at our Medical Centre as a result of an acute asthmatic attack.

“In such profoundly sad circumstances, it is ordinarily the preference of the University to respect the privacy of Temitayo’s family by not commenting publicly on the events surrounding her unfortunate demise.

“However, the introduction into the public space of painful and clearly malicious misinformation in this regard, makes it imperative that the University issues these short comments, to set the record straight.

“Temitayo arrived at the University Medical Centre in the early hours of Tuesday in the company of her sister, a co-student of the University. She was immediately attended to by the Medical Doctor and Nurse on duty.

“Upon the diagnosis of an acute asthmatic attack, Temitayo was admitted into the Female Ward of the University Medical Centre. She was immediately medicated and emergency palliative measures, including intranasal oxygen, were administered to her to alleviate the symptoms presented.

“For the avoidance of doubt, Temitayo, according to her sister, developed complications around 3:00 am but did not present at the Medical Centre until about 5:20 am.

“Temitayo’s vital signs were closely monitored at all times. But after initially responding positively to the treatment administered, her condition took a turn for the worse.

“The University’s medical personnel, again, medicated her as required and administered further emergency measures to relieve her condition, including a nebulizer and recommencement of intranasal oxygen.

“The University is deeply saddened that despite the best efforts of our medical personnel, Temitayo tragically passed away that morning.”

The statement stated that “Elizade University sets great store on the value of the life of each and every student that we are privileged to have been entrusted into our care.

“It is for this reason that we ensure that top-grade medical facilities and personnel are always available to meet our students’ needs and that those facilities are maintained at a fully functional state at any time of the day and night.

“The University is deeply distressed by Social Media commentaries falsely representing the cause of Temitayo’s unfortunate demise and, further, claiming that her loss occurred as a result of a short-fall in the facilities available at our Medical Centre.

“The commentaries even go to the extent of stating that the tragic event of Tuesday morning occurred during a power blackout. This is far away from the truth.”

Adegbenro added that “It is patently obvious that the actions taken by our medical personnel in their desperate efforts to restore Temitayo to good health could not have been done without power supply or in the absence of either adequate facilities or required medication.”

The statement read further, “It is our fervent prayer that God Almighty will comfort Temitayo’s parents, siblings, and other loved ones in the face of this irreparable loss. The University also wishes to use this medium to appeal to those who would fabricate such misinformation to have consideration of the pain that such conduct could cause to Temitayo’s loved ones.”