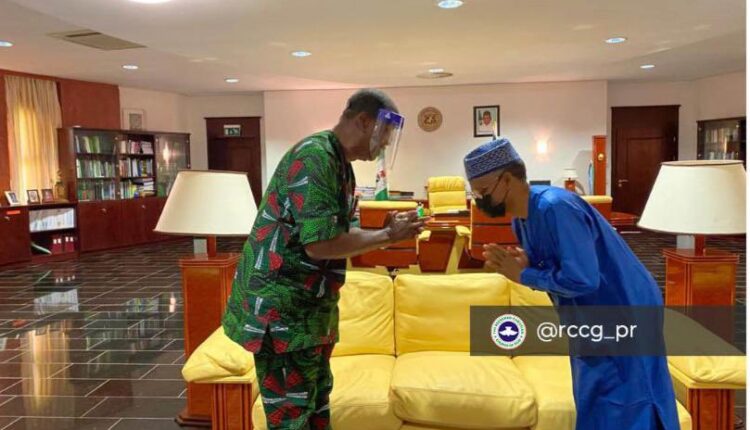 The Kaduna State Governor, Nasir El-Rufai, and general overseer of the Redeemed Christian Church of God (RCCG), Enoch Adeboye, have met to discuss security challenges that had resulted in killings and kidnappings across the state.

The meeting, which was convened at the request of El-Rufai, lasted for several minutes with the governor explaining measures already taken to put an end to insecurity particularly to prevent future abduction of RCCG members and other residents across the state.

During the meeting held at the Kaduna statehouse on Tuesday, the cleric described the governor as a tender-hearted man, just as he prayed that God will fight for him to overcome the challenges of banditry and kidnapping in Kaduna.

Adeboye, who noted that the insecurity across the country has defied all measures and that the only solution was for Nigerians to seek God’s intervention because it is far beyond the abilities of any human being.

According to him, when God begins to do what He alone can do, then the world will see it and they will glorify the name of God, and many people who might be criticising you now will probably see the other side of the story.

“We know that you have a problem that only God can solve. The problem is far beyond the abilities of any human being. We have known each other for years.

Adeboye also assured the governor that a victory was around the corner and noted that Kaduna and Nigeria would overcome insecurity.

On his part, El-Rufai said Nigeria needs divine intervention to surmount its security problems, while he also urged Adeboye to keep interceding for Kaduna state.