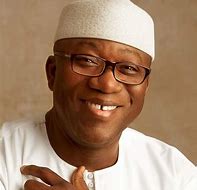 The Ekiti State Governor, Kayode Fayemi, has disclosed that he has placed himself on self isolation following suspicion that he could be positive for the deadly coronavirus infection which is presently ravaging the country.

Fayemi stated that he had submitted himself to be tested for the novel viral infection, saying that the decision had been taken when he found out that he had been in meetings with two people who later tested positive for the infectious pandemic.

He explained that though the test results was not yet ready for collection, he had taken precaution to avoid possible spread  of the disease to other people by isolating himself.

The governor made the announcement through a tweet on his official tweeter handle, @kfayemi, on Wednesday, expressing hope that his test results would come out negative and urging his colleages and all persons who had been in contact with him to also submit theirselves for coronavirus testing with immediate effect.

I just took a CoviD 19 test, having gone into self isolation since yesterday evening. I'm asymptomatic and feel well, but I was in meetings with two people who had since tested positive. I look forward to an all clear and have encouraged all my colleagues to take the test. JKF

Any gathering above 25 people is illegal- Sanwo-Olu