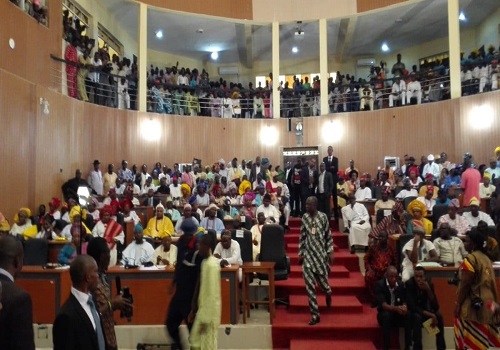 The Ekiti State House of Assembly has unanimously approved the state’s budget of N100.8 billion for 2022 after which it consequently adjourned proceedings indefinitely so that members could consult with their constituents and prepare for the upcoming Ekiti APC governorship primary.

Before the approval of the budget, the committee, after due consultations through public hearing was said to have recommended N60.5 billion as recurrent expenditure and N40.3 billion as capital expenditure.

The approval on Friday, followed the adoption of the House Committee on Finance’s report read by its Chairman, Olubunmi Adelugba (APC-Emure).

Adelugba lauded the cooperation of stakeholders for ensuring that the budget process was given speedy consideration.

The motion for the adoption was said to have been moved by the Majority Leader, Gboyega Aribisogan (APC-Ikole 1) and seconded by Teju Okuyiga (APC-Gbonyin).

This was after it was ratified by the Committee of the Whole House chaired by the Speaker, Funminiyi Afuye.

As gathered, the Governor of Ekiti State, Kayode Fayemi presented the Appropriation Bill christened “Budget of Legacy and Consolidation’’ to the Assembly on Oct. 28

Before passing the bill, the speaker lauded the cooperation of members with the Executive and the Judiciary throughout 2021.

He announced that members would immediately proceed to the governor’s office to present the bill for Fayemi’s assent.

“Let me formally announce that we shall, all members, proceed to the governor’s office to present the budget in order for Gov. Fayemi to assent to it,’’ he said.