LASG cautions DPR against aiding Tank Farms, others on… 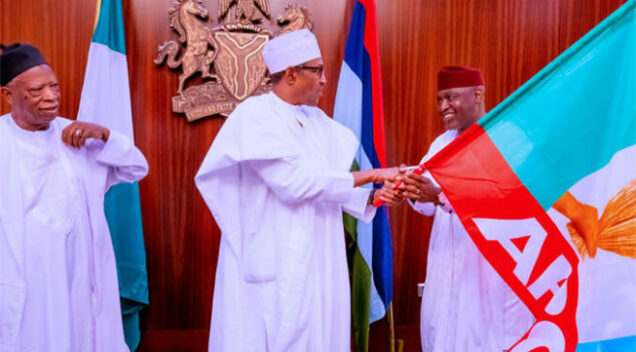 President Muhammadu Buhari has congratulated the candidate of the All Progressives Congress (APC), Biodun Oyebanji, after becoming Ekiti State Governor-elect and described the party’s victory during the gubernatorial poll as a morale booster for the forthcoming election in Osun and next year across the country.

Buhari said that the massive votes polled by the APC candidate during the exercise further indicated that Nigerians appreciated the efforts of the ruling party to ensure every citizen gets a dividend of democracy since assumption of office both at the federal and state.

The president added that Oyebanji’s victory at the poll also indicated that the party formed over seven years ago was becoming stronger daily and appreciated by Nigerians.

He, meanwhile, cautioned members of the party not to relax but to consider outcome of Ekiti gubernatorial poll as a plus and work effectively to ensure that the victory transcends to the Osun governorship poll and 2023 general election

Buhari stated these through a statement released by his Special Adviser on Media and Publicity, Femi Adesina, on Sunday while rejoicing with the Oyebanji who was declared winner of Ekiti gubernatorial election after polling more votes than other candidates during the exercise.

The President said the victory is well deserved considering Oyebanji’s contributions to the development of the State and the party, before his nomination as the standard-bearer, urging him, however, to be magnanimous in victory in the interest of the people of the State.

Buhari also rejoices with the APC chairman, Abdullahi Adamu, and the National Working Committee (NWC) for the victory, the first under the tenure of the newly elected executives of the party.

According to the statement, this is a good beginning for you and your team. The APC is getting stronger and more united. The victory of our party in Ekiti is an indication of the confidence of Nigerians in the ability of our great party to deliver quality governance to all.

“Buhari also felicitates the people of Ekiti State for the smooth conduct of the election, affirming that they are the real victors as they have been able to freely choose their leader for the next four years.

He lauded the Independent National Electoral Commission and the law enforcement agencies for the preparations put in place, urging them to keep the momentum for upcoming elections.

Owo massacre: We have not heard the last!