Sowore’s re-arrest while on trial is treason against…

Eight persons kill, 23 others rescue during clashes in Katsina

No fewer than eight persons were reported to have been killed and 23 persons rescued during clashes between the Nigerian military and bandits in Kurfi Local Government, Katsina state

Of the eight victims, two were reported to be residents of Lambo village in Wurma Ward and six others were members of a 30-man bandit group killed by the Nigerian military during the face-off that further aided the recovery of 74 animals and 12 motorcycles from the bandits.

A breakdown of the animals recovered from the bandits while been rustled includes 23 Cows, 20 sheep, and 31 goats as well as one G3 rifle abandoned by other bandits after they were alleged overpowered by the military firepower.

Confirming the clashes, Katsina Police command spokesman, Isah Gambo, in a statement made available to newsmen on Tuesday, explained that the two persons were killed by the bandits during an attack on the community.

Gambo noted that minutes after the attack, the Nigeria Police Force, Nigerian Army, and Nigerian Air Force were alerted and they blocked all their possible escape routes. 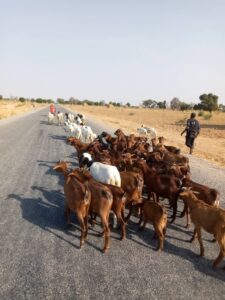 “Consequently, the teams laid siege for the hoodlums between Ummadau to Kwayawa village and engaged them into a fierce gun duel, as a result of which six bandits were killed, all the 23 kidnapped victims including 17 women and six children, were rescued, 23 Cows, 20 sheep, and 31 goats recovered, 12 motorcycles and one G3 rifle recovered.

“Search parties are still combing the area with a view to arrest more suspected bandits and recover their dead bodies. Investigation is ongoing”, he added.