Just In: Buhari leaves for France ahead 2021 African Finance… 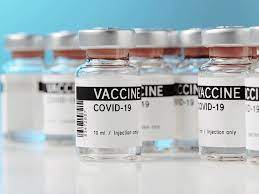 Egypt has announced its plans to unveil the construction of a $50 million vaccine storage facility in July for the storage of about 150 million doses of COVID-19 and other vaccines annually.

The facility is said to be built as part of an initiative by the Egyptian Government to make the country the hub of Covid-19 vaccine production in Africa.

The Chairman of Egypt’s Holding Company for Biological Products and Vaccines (VACSERA), Heba Wali, said Egypt currently has the capacity to produce the country’s COVID-19 vaccine needs and that VACSERA is getting technical support from China in its COVID-19 vaccine production.

Wali made the announcement in Cairo, on Monday, while addressing newsmen hosted from 22 African countries and expressed her optimism that Egypt would be producing up to 60 percent of the vaccine needs of the African continent by 2040.

She said that the World Health Organisation had since selected Egypt as one of the global centers of COVID-19 vaccine production.

Wali said that VACSERA is also looking forward to starting the production of vaccines to tackle Avian flu and pneumonia, which had posed severe health problems in many African countries over the years.

According to her, VACSERA also has the capacity to produce 100 million doses of coronavirus vaccines annually, saying that 70 million doses were produced in five months at the peak of the pandemic.

“There have been 254,000 deaths and 12.086 million reported infections in Africa since the outbreak of the disease in 2019 with Egypt recording about 24,690 deaths, according to WHO statistics,” she said.

She disclosed that the first shipment of the vaccines was made to Palestine in a gesture to help the Middle East nation to fight off its COVID-19 challenges.

Wali further said that VACSERA is developing a strategy with Centres for Disease Control in other African countries to find a common ground for vaccine production in the continent.

As gathered, VACSERA has its headquarters at Agouza in Egypt’s Giza District and currently has about 3,000 workers.