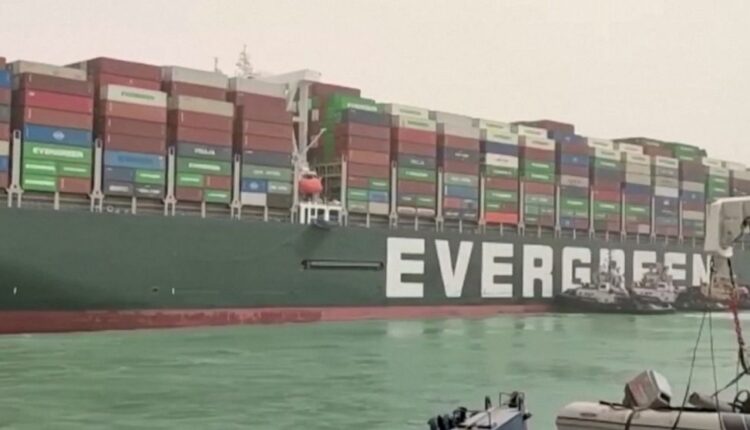 A fresh effort is under way to refloat a giant container ship blocking Egypt’s Suez Canal. Canal authorities say 14 tugboats are trying to take advantage of Saturday’s high tide and more will arrive on Sunday if the latest attempt fails.

The Ever Given became wedged in the canal, one of the world’s busiest trade channels – on Tuesday.

More than 300 ships are stuck on either side of the blockage. Some have had to reroute around Africa.

The chairman of the Suez Canal Authority (SCA), Osama Rabie, told a news conference on Saturday that 9,000 tonnes of ballast water – which is stored in tanks to stabilise the ship – had been removed to help lighten the vessel.

He said the stern had begun to move on Friday night, and that the rudder and propeller had started working again. Strong tides and winds had made freeing the ship more difficult, he added.

Rabie could not say how soon the ship might be refloated but said the SCA would “work around the clock” to get other ships through once the Ever Given was free.

Meanwhile, the sunk ship is holding up $9.6bn of goods a day at the Suez Canal. Data from shipping expert Lloyd’s List values the canal’s westbound traffic at roughly $5.1bn a day, and eastbound daily traffic at around $4.5bn. Despite efforts to free the ship, it could take weeks to remove experts say.

The Ever Given, operated by the Taiwanese company Evergreen Marine, is the length of four football pitches and one of the world’s biggest container vessels. The 200,000-tonne ship is capable of carrying 20,000 containers.