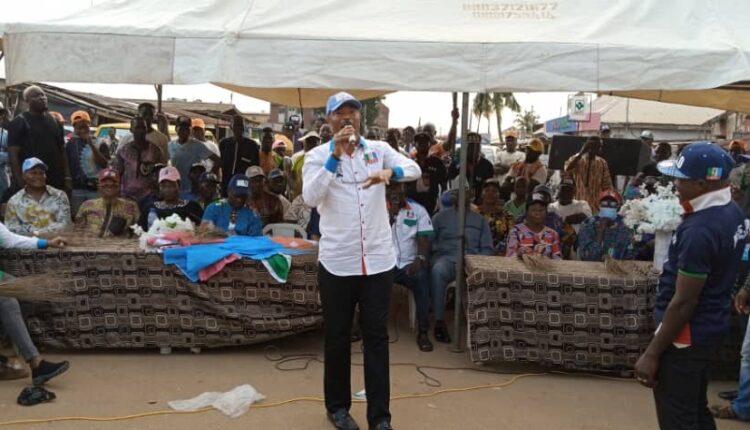 The chairman of Egbe-Idimu Local Council Development Area (LCDA), Kunle Olowoopejo, popularly called KSO has promised to improve the lot of every resident through better road infrastructures across the council when elected for the second term.

Olowoopejo, who would be vying for the chairmanship seat on the platform of All Progressives Congress (APC), hinted that aside from the road presently under construction across the council, more roads have been identified and listed for construction, saying works would commence immediately after the administration is sworn into office.

He gave the assurance yesterday while addressing dozens of residents within the council around Omoboriowo axis after embarking on a door-to-door campaign across the council, explaining his agenda to the people.

Some of the roads already listed for construction by the chairman were Omoboriowo street, a road that serves as a link road, and other adjourning roads within the axis to increase connectivity and assist businessmen to move their goods easily without stress.

The chairman stressed that if not for the COVID-19 pandemic that halted the administration plans for the council, more empowerment programmes would have been conducted across the council but assured that more would be done during his second term.

Addressing residents, the vice-chairman candidate, Mutiu Adeniyi, appealed to members of the party to ensure that they vote and encourage their neighbours to also cast their votes during the poll.

According to him, this is the election that affects our community and determines the development of the council. I am appealing that we all monitor the vote and ensure the votes are counted.

Earlier, the Chairman of APC in the council, Akibu Soliu popularly called Sanjay, assured residents that the mandate before the chairmen from the party was that after they assume office, they should work for the development of their council.

Soliu appealed to residents that they should not consider voting for the Peoples Democratic Party (PDP), adding we have told them that they should forget their plan, so do not vote for them.