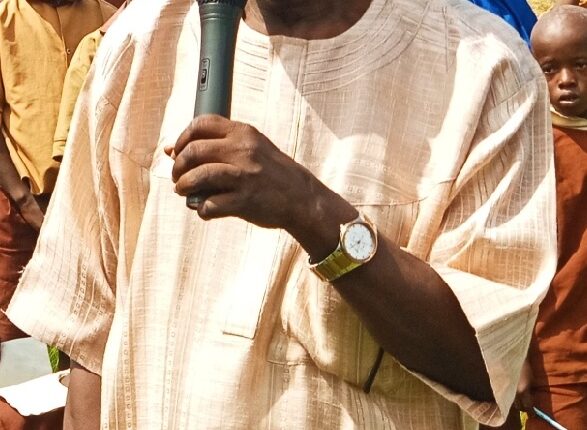 Both former public officeholder may be invited any moment from now following a petition before the anti-graft agency written by a transparency group, the Center for Transparency in Governance (CTG), demanding for a forensic audit of the Local Government account books during the tenure of Abiola-Lamby and Adegboye from January 2018 to November, 2020. 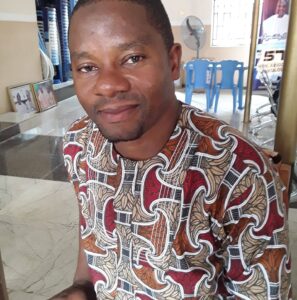 The group, in a letter sent to EFCC and sighted by The Guild, appealed that they be probed particularly their domiciliary accounts Zenith and Polaris Banks, alleging that public funds left in their care within the three years were diverted into these private accounts with these banks.

In the petition dated November 6th,2020, and signed by CTG’S Director of Mobilization, Michael James, which was forwarded to the Acting Chairman and Southwest Zonal Head of the EFCC, argued that the funds if used judiciously would have improved the standard of living within the council but corruption, like a deadly virus, attacks every vital structure that makes society’s function effectively.

The group further alleged that there was no single reasonable project initiated under their tenure for the period of three years (January 2018 to November,2020) due to the misappropriation of public funds.

“Also, all the public funds being allocated for construction of public utilities as Ward (Constituency) projects for the period under review were siphoned by the outgoing Leader of the Legislative Arm of the Council area, Mr. Taiwo Adegboye.

“We want the anti-graft body to invite some of the career officials such as; Council Managers, Directors of Finance, Director of Works, and Internal Auditors of the Egbedore Local Government area, Awo for period of January 2018 to November,2020 for more clarifications.” 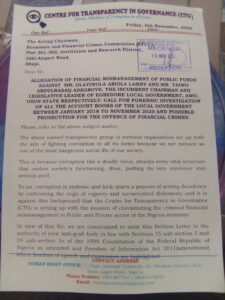 It submitted that all the actions of the outgoing Chairman and Legislative Leader(Abiola-Lamby and Adegboye), were contrary to the spirit of democratic ethos and value and Social justice contract with the people of the area and this action has serious negative impact on the lives of the masses living in the area. 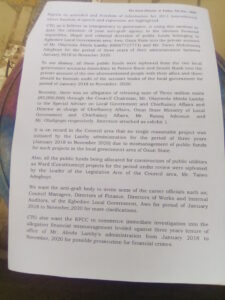