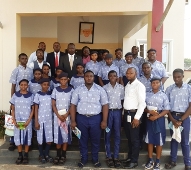 The Economic and Financial Crimes Commission, EFCC, has educated secondary school students on effects of corruption and other social vices on their well being and development of the society.

EFCC said that corruption and other social vices affect the image of the country and its ability to provide basic needs for citizens.

The Zonal commander for EFCC in Benue State, Friday Ebelo, who sensitized the schoolchildren during a courtesy visit to the command headquarters in Makurdi on Friday, told the students that shunning any act that could aid corruption and other social vices would create a better society for all.

The anti-graft body enjoined the students to play a part in eradicating corruption and other crime related issues which can tarnish the image of the country, adding that they should join hand with the agency in fighting corruption for a better tomorrow.

While educating the students on mandates of the Commission and its operational mode, the Commander urged the schoolchildren to help sensitize their families, friends and the society at large on corruption disadvantages.

He further advised the students to be law abiding citizens as most criminals started as violators of rules and regulations, adding that by obeying laws, they are on a good path to making the society crime free and better.