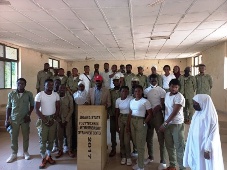 The Economic and Financial Crimes Commission has educated National Youth Service Corps (NYSC) members on the negative impact of cybercrime and other crimes perpetrated through the cyberspace on the country’s image and their career development.

EFCC said that cybercrime and other related attrocities done on the cyberspace were often perpetrated by youths which was why the commission considered the corp members as the most qualified ambassadors and to sensitize other youths on cybercrime and its negativity.

Addressing Corp members in Jigawa State during a sensitization lecture, the anti-graft agency’s Zonal Commander, Farouq Dogondaji, urged the members to be patriotic and join the anti-corruption army and work for Nigeria to become free from the grip of corruption, economic and financial crimes.

Dogondaji, while inducting the Corp members into the EFCC/NYSC Community Development Service Group yesterday, urged the inductees to become good ambassador by reporting any financial crimes discovered within their communities.

The commandant, who was represented by the Head of Public Affairs of the Kano Command, Idris Isiyaku, urged the CDS members to be whistle-blowers as they are the Commission’s ambassadors in their places of primary assignment.

He further charged the newbies to take advantage of the newly invented application, “Eagle Eye”, which was developed by the Commission as a new tool of crime reporting,

According to him, the youths should endeavour to be good citizens and contribute their quota to the ongoing war against cybercrime across the state.

He added that their contribution would save Nigeria from tagged a corrupt country among comity of nations and end the activities of those abusing Nigeria’s economy.