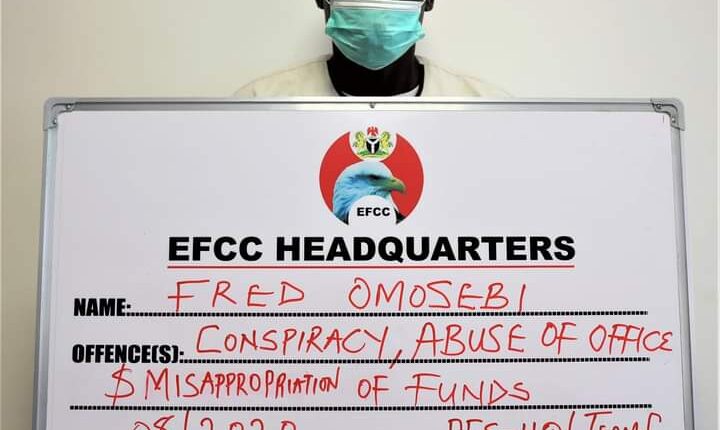 Adekola was arraigned by the anti-graft agency on an 11-count charge bordering on conspiracy, abuse of office and diversion of the organization funds into personal use while serving in Nigeria.

As gathered, Adeola, a Pastor of the Adventist Church and Country Director of the Adventist Development and Relief Agency of Nigeria, allegedly diverted the Church`s relief funds for personal use including paying for his Ph.D programme in Babcock University and illegally enlisted his wife on the Church’s payroll.

When the suspect was docked before Justice A.O Otaluka, the Count two of the charge reads: “That you OMOSEBI FRED ADEOLA, being an employee and the Country Director of the Adventist Development and Relief Agency of Nigeria, and in that capacity entrusted with the funds of the Agency, and being a signatory to the various bank accounts of the Agency, on or about the 13th December, 2017, in Abuja, within the jurisdiction of this Honorable Court, did commit Criminal Breach of Trust by transferring the sum of Seven Million, Seven Hundred and Fourteen Thousand Naira (N7,714,000.00) from the account of Adventist Development and Relief Agency of Nigeria to the account of AyeniGbenga Joseph domiciled with Diamond/Access Bank with account number 0078083764, which was cashed and the sum of Two Million, Five Hundred Thousand Naira (N2,500,000) was given to you cash by AyeniGbenga Joseph on your instruction, thus converting the said sum of N2,500,000.00 to your own use, and thereby committed an offence contrary to Section 311 of the Penal Code Law, Cap. 532, Laws of the Federation of Nigeria (Abuja), 1990, and punishable under the same Section 312 of the same Law”.

After the 11-count charge was read to the cleric during the legal proceedings yesterday, the defendant, meanwhile, pleaded not guilty to all the charges raised against him by the EFCC.

The judge, after due consideration, granted the defendant bail in the sum of N10 million and that he presents two sureties in like sum with the sureties being resident of Abuja as well as have a property worth over N10 million.

According to Justice Otaluka, the sureties must provide Identity cards, passport photographs and N3 million Bond must be provided to further show their status.

Before the case was adjourned by the judge to September 30, 2021 for trial, prosecution counsel, Ibrahim Audu, asked the court for a trial date and also requested that the defendant be remanded in custody pending trial.

But the defence counsel, E.G Alala notified the court of a pending bail application, and prayed the Court to grant his client bail in the most liberal terms as the defendant is a modest man of God who has honoured all the invitation by the EFCC.